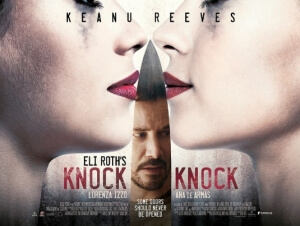 However, director Eli Roth goes a few steps further in Knock Knock by presenting something far more sinister in this flawed but entertainingly campy thriller that goes for Fatal Attraction by way of Funny Games.

Roth – best known for “goresploitation” flicks like Cabin Fever and Hostel – here swaps blood for suspense in this tale about a well-meaning family man (Keanu Reeves, who after years of playing the straight-faced monotone hero finally gets to relish playing something that requires actual emotion) who gets sucked in by the temptation of the two aforementioned buxom babes (Lorenza Izzo and Ana de Armas) when they show up in the middle of a rainy night asking for shelter. Around the mid-way point, which is where said porno usually ends, the film completely switches into something a bit more demented and uncomfortable; without giving too much away, much of it involves the desecration of Reeves’ wife’s art sculptures, the mentioning of the hit show To Catch A Predator, and a disturbing re-enactment of a TV quiz show. We’re not going to lie, it’s very hard to stomach – but not entirely for the reasons you might expect.

Sure, the content and context of the horrific scenarios in that second half is pretty messed up, but what both makes it work and helps it fail at the same time is the uncertainty of how it is being handled. Roth is a very hit-and-miss horror director for certain fans: some appreciate his ability to go all out when it comes to on-screen violence and how much gore we can take until we can take no more, while others find his methods repulsive and unquestionably exploitative. You can see both these viewpoints on full display in this flick – he doesn’t hold back when he’s showing the extreme methods that these two young women practise at Reeves’ expense, but at the same time the lack of restraint in certain scenes (for instance, a rape scene involving Reeves’ daughter’s school uniform) makes it come off more like a softcore Skinemax B-movie than an intense psychological thriller. Either way, it’s clear that this is very new territory for Roth and he doesn’t entirely nail the required tension needed to truly horrify his audiences as he has done in the past; however, the campiness that stems from its pure insanity, as well as some of the over-the-top performances, is what makes it delightful entertainment.

It may not offer new insight into the hypocritical nature of sexual politics, such as how nice-family-man Reeves starts to show his more misogynist side as he’s being tortured physically and psychologically by these two women, but it does offer an interesting angle to it – that no matter how good you may claim to be as a loving husband and father with a respectable job and good friends etc, one simple mistake such as sleeping with two young women while your family is away for the weekend can ruin everything. It makes things ultimately scarier because, at the end of the day, responsibility is not down to these two psychopathic women but rather Reeves’ character – no matter what, he still chose to let them seduce him away from a comfortable family life into a moment of adulterous passion, and now he must suffer the consequences of his mistake. Granted, it’s a very disturbing way of suffering, but even so he brought it on himself by deciding to sleep with these women and not sending them on their way. So, in some respects – even though their methods are completely twisted and convoluted – the two insane young women are technically in the right while Reeves is destined to suffer.

Even so, it’s the camp nature of everything that truly makes this film worth watching, just based off of the director clearly being out of his element alone. Not that there’s anything truly wrong with wanting to branch out from only doing blood-drenched horror flicks, but there has to be some understanding of how these type of films truly work and while Roth doesn’t entirely nail the Hitchcockian tone he seems to be going for, his indulgence in going over the top in terms of performances and writing and just about everything else is more than worth the price of admission. It’s bound to be remembered as a camp cult classic in the same way that Basic Instinct and Showgirls is remembered, but Knock Knock is a type of campy erotica that’s in a league of its own.

Knock Knock both benefits and suffers from director Eli Roth’s lack of experience with the psychological thriller genre, with his over-the-top direction paving the way for an entertaining and occasionally smart camp classic.