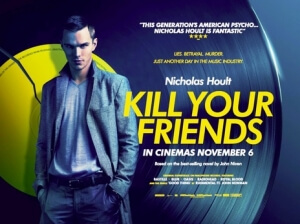 BASICALLY…: A hot-headed A&R man (Hoult) begins a murderous streak in a desperate attempt to keep his luxurious career afloat…

Two titles are bound to come up for comparison during this review at multiple instances. Both of them are based on pieces of literature that present a darkly satirical side to certain industries, and at their respective centres are two leads that are so unapologetically repugnant and loathsome you almost wish they were real so you could punch them in their faces. They are also titles that this particular movie so desperately wants to be, but no matter how hard it tries it cannot recreate the same formula that made those other titles dark classics.

In other words, Kill Your Friends is neither American Psycho nor Filth.

The subject of this review, also based on a darkly satirical novel (this one by John Niven, who also provides the script), is based in the music industry, specifically the mid-to-late 90s era of Britpop where acts like Oasis and Blur reigned supreme. The repugnant and loathsome figure this time round is A&R man Steven Stelfox (Nicholas Hoult), who is aggressively seeking the next big act to sign for his record label which will hopefully lead to a promotion to the head of his department, but the wishy-washy tastes of the public are making it difficult to find solid performers, not to mention the numerous personalities of colleagues and hot-headed musicians. In one such fit of rage, Stelfox commits a brutal murder and, in the wake of an impending investigation, must find a way to level out his inner demons if he is to demolish the competition.

Here’s the thing, though; both American Psycho and Filth were able to do this sort of film much better, with a more instant sense of intelligence and visual wit, whereas this is the kind of film that opens with an unconscious James Corden being urinated on whilst his dog laps the disgusting fluid up. If you so much as winced at the very thought of that, then you’ll have an idea of what this film actually does as opposed to what it sets out to do. Director Owen Harris, having previously only directed episodes of Misfits and Secret Diary of a Call Girl with this being his film debut, attempts to mask the film’s bizarrely tame nature (even for a film with endless amounts of sex, drugs and violence) with House of Cards-esque asides to the camera, but they’re not enough to disguise how it really says nothing that anyone by this point doesn’t know about the cutthroat nature of the music industry. Those two other films took much safer industries – one of which is the police force, of all things – and turned them completely inside out thanks to the sheer ferocity in the satire, whereas here the biggest satirical element is just the zaniness and eccentricity of certain music acts, which is all tired stuff by this point (we’re an audience who’s all too familiar with The X Factor and the people that come out of that showcase). In that case, Kill Your Friends has neither anything to really say against the very industry it’s portraying, nor does it take on a satirical form that’s witty and actually compelling.

Most notably, the lead character here falters heavily next to the ones from those other films. American Psycho, for instance, placed at its core an absolute construct of evil in the form of Christian Bale’s Patrick Bateman, as did Filth with James McAvoy’s Bruce Robertson, but their respective evils were calculated, constructed, even dangerously charming, and most importantly they were extremely complex figures that provoked genuine interest into the psychology of their well-being. Hoult’s Stelfox, on the other hand, has no such qualities; he’s just a massive prick with an ego double the size of Hoult’s 6′ 2” height, and the kind of excessive douchebag lifestyle that would make Jordan Belfort or the Entourage boys cringe. Above all, he’s just not interesting as a character with no redeeming qualities or ones of interest as well as being fundamentally rubbish at his own job; he’s a product of entitlement, and those are the sort of figures that cannot carry a film like this unless they’re written well, which this character certainly isn’t. Bateman and Robertson were the same, but much more care was put into their characters than the one on display here.

What we have is a witless and thoroughly unenjoyable attempt to play in the big leagues alongside American Psycho and Filth, but Kill Your Friends ultimately fails to realise that it is just as hollow an imitation of those films as its main poser character is of two very similar, but much better, lead characters.

Kill Your Friends lacks the satirical bite or the intelligent sophistication of spiritual predecessors American Psycho and Filth, and is instead a ruthlessly aggressive film with a wholly unlikable character with no real redeeming qualities that doesn’t even attempt to say anything new or edgy about the music industry.