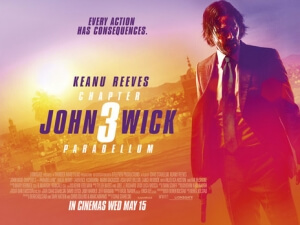 BASICALLY…: On the run with a $14 million contract on his head, John Wick (Reeves) must fight his way through hordes of assassins to stay alive…

Ever since then, John Wick has been killing people left and right who just happened to get in the way of his vengeance, from one headshot to the next, with nearly zero commiserations for the poor sod unfortunate enough to cross or double-cross him. It’s been a wild ride so far, and with the third entry in the series the action has been upgraded to something even wilder, with more enthralling kills and more astonishing action sequences than ever before, and it’s by far the most fun instalment to date in a series that’s been nothing but fun from the very start.

John Wick: Chapter 3 – Parabellum picks up right where Chapter 2 left off, with Reeves’ John Wick having been excommunicated from all services of The Continental – an establishment tailored exclusively for hitmen such as Wick – and placed with a $14 million bounty, following Wick’s execution of a high-ranking member of the assassin’s guild on Continental grounds during the climax of the previous film. Now, every single assassin in the city – nay, the world – is out for Wick’s head, and unless he can use what little resources he has left to make it out in one piece, he’s got no choice but to fight his way through every single killer that’s coming after him.

That’s really all you need in terms of plot; there’s a bunch of people out to kill John Wick, but not if he can kill them first – pure and simple, just the way it ought to be. This ensures that the focus can primarily be on the action, which has always been the greatest achievement of this series – that, and the fact that it’s Keanu Reeves doing it all – and has never been better realised or more over-the-top than in this third entry. Deadly weapons in the movie include, but aren’t limited to, guns, knives, swords, axes, dogs, horses, motorcycle helmets, belts, and even a book – much of the fun comes from how these things are used in the art of battle, sometimes in unexpectedly humorous circumstances, as well as how slick and smooth this fight choreography is to where it becomes like a ballet recital, with the camera staying still enough for you to take in every single punch, kick, chop and gunshot wound like you would a dancer on a live stage. It is astonishing how well the action in this film has been realised, as it’s so beautifully executed under the careful direction of Chad Stahelski, gorgeously shot with neon colours just oozing out of the screen left and right, and performed as ever with grace by a fully committed Reeves who soaks up every hit like an indestructible sponge.

With the introduction of the Continental Hotel and its many international spin-offs over the past couple of films, this series has introduced us to an intricate and endlessly fascinating world of assassins with their own quirks and ways of life – in Chapter 2 alone, we got to see violin players, sumo wrestlers and an entire network of homeless people reveal themselves as ruthless hitmen within this universe – and in this film we get to see a little more of it, with enough mystery still embedded into its existence that nothing about it is ruined or needlessly explained to us. For instance, we get to travel to such a hotel in Casablanca, run by Halle Berry as a bitter old acquaintance of Wick’s, and later as far as the sandy dunes of the nearby desert, which just goes to show that however wide we thought this network of killers stretched across the world, it wasn’t wide enough; this really is a world where assassins seem to be the most powerful people on the planet, and how all three of these movies have built up this world as something so organised and lived-in is a textbook example of how to do the whole world-building exercise right. Even though there are times in this movie where there are so many factions of this assassin’s guild that it’s sometimes hard to keep up – sometimes, the politics of Game of Thrones can be easier to follow – it’s such an enthralling world that has been set up that you’re desperate to learn a hell of a lot more about all of it.

As highly entertaining as this movie is, with some of the most impressive action I’ve seen since Mission: Impossible – Fallout, a sense of humour that’s funnier than most straightforward comedies I’ve seen so far this year, and a great leading man in Keanu Reeves who is just so damn good at shooting people in the head that nobody else can even think about competing against him, I have to say there is a very slight disappointment that this was not necessarily the ending to a trilogy that I was hoping for. Without giving anything away, it ends with an obvious tease for a fourth movie in this saga, which I am immediately looking forward to if that’s the case, but after hearing that this was always planned as a trilogy I was hoping for this to be the big one to go out on, with most if not all of the plot threads neatly tied up by the end. Don’t get me wrong, this movie absolutely delivered on the action and everything else I was hoping for with this film, but I feel they may have missed a chance to make this a perfect trilogy of action movies, with a clear beginning, middle and end.

That’s really just me whining though, and it doesn’t ruin the film overall as I still had an absolute blast watching this movie, as I have done for the previous two movies, all of which I am now fully convinced is the greatest advertisement for PETA ever, with the message being that if you kill a defenceless animal, Keanu Reeves will come and shoot you in the head in increasingly brutal ways. Now THAT’S effective advertising!

John Wick: Chapter 3 – Parabellum delivers some of the series’ most enthralling and beautifully executed action sequences to date, continuing its fascinating world-building with each and every brutal gunshot to the head.