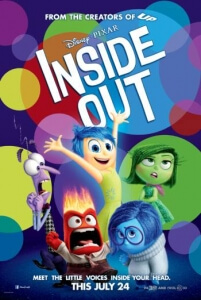 BASICALLY…: Inside the mind of 11-year-old Riley (Dias) live emotions Joy (Poehler), Sadness (Smith), Anger (Black), Disgust (Kaling) and Fear (Hader), who face the challenge of driving Riley as she moves with her parents to San Francisco…

As much as we love Pixar, none of their films have truly made us cry. Sure, there are some that bawl at the first ten minutes of Up, and those who shed multiple tears at the end of Toy Story 3 and countless others, we are unfortunately not among that select group. Their films are certainly spectacular in their own way (except the Cars films), but sadness is just the one emotion that hasn’t been active enough to get us a lump in our throat.

Imagine our surprise, then, when Inside Out managed to get the waterworks going on TWO separate occasions.

To say that it is emotional is a huge understatement: heck, the characters themselves are emotions, including Amy Poehler’s bright yellow pixie Joy, Phyllis Smith’s teardrop blue Sadness, Lewis Black’s red brick Anger, Mindy Kaling’s green mean girl Disgust and Bill Hader’s stick-thin purple Fear. They co-ordinate the thought process of young Riley Anderson (Kaitlyn Dias), an 11-year-old girl who is suddenly relocated with her parents from Minnesota, Nebraska to San Francisco – but Riley is just the setting for the real adventure, which sees Joy and Sadness embark on a journey through the processes of the mind when both are unwillingly transported away from “Headquarters”, leaving the remaining trio of Anger, Disgust and Fear to run the show.

Pixar has usually been one to show raw emotions in its animated films, but here we’re convinced that they’ve finally reached that state of perfection, and the results are so wondrous, so imaginative and so brilliantly done that it surely ranks among the very best that the studio has ever put out. Every single moment, there is something around the corner to admire and be surprised by, in terms of everything from characters to jokes to even the designs. Like Song of the Sea, it also offers an invitation to us to explore and – most importantly – breathe in these carefully-constructed animated environments, though Inside Out can get away with more creativity because it is quite literally happening inside a young girl’s mind. Concepts like core memories, dreams, long-term memory, imagination and even abstract thought are all used and explored to their furthest detail, sometimes to utterly hilarious or utterly captivating effect, and it is something that director Pete Docter (Up, Monsters Inc.) and his fellow animators at Pixar have been able to express without any hint of cynicism and a huge genuine feel of passion and love. Everything is handled perfectly, and sucks us more into this world of emotion and wonder than a good majority of the live-action films we’ve seen so far this year, or even any year.

The way it presents such strange concepts in an extremely creative way is something to commend – Dream Productions, for example, is a Hollywood-style film studio that uses reality filters to mask out the tacky costumes and sets as they are broadcast as Riley’s dreams; meanwhile, a sealed-off area which is quite literally contained with Abstract Thought gives Pixar the rare opportunity to use other styles of animation to create a strange set piece that’s wondrous in its strangeness. We can only imagine that psychologists are going to find this movie to be an extremely interesting dive into the minds of children, and if not enjoy it as an artist’s representation of what goes on inside that noggin’ of theirs.

As ever with Pixar, the animation is spectacular with the tightly-woven script complimenting it wonderfully, and vice versa, while the vocal performances are absolutely fantastic – Poehler and Smith are an excellent odd couple, while Richard Kind gets some of the most captivating moments as he channels the likes of the late Dom DeLuise as Bing Bong, Riley’s past imaginary friend with a cotton candy body, and is part-cat, part-elephant and part-dolphin. It’s likely that even in a film where Lewis Black is playing an angrier and redder version of himself, it’s the imaginary friend that will become one of the kids’ absolute favourites.

The absolute star of the film, however, is the emotion. It sounds obvious with a film about emotion, but folks, it got us to shed a few tears for a reason. There’s a great message about accepting sadness and how it should be used in everyday life, as opposed to just being happy all the time and shutting it out; it simply isn’t healthy to bottle your feelings up, and this film teaches the moral of embracing all of your emotions to get by in life and deal with whatever happens because of them. We won’t exactly give away what parts finally got us to shed tears at a Pixar movie, but trust us when we say that you’ll know them when you see them – it’s the kind of brilliance that only this animation studio knows how to do, and that others do their best to copy but only marginally succeed (the closest may be DreamWorks Animation, but even then it’s very few in between; after all, for every How To Train Your Dragon, there’s a Turbo). You’ll be laughing, you’ll be scared, and – yes – you’ll be crying all the way through it.

Predictable though it may be to say, Inside Out truly is one heck of an emotional experience. Plus, it broke our long streak of not being able to cry at a Pixar movie. Goddammit, guys.

Inside Out is by far one of Pixar’s best films, if not their best film; the way it tackles its tricky concepts and its emotional impact is a marvellous achievement, and makes for fantastic viewing for people of all ages. However, please remember to bring a tissue with you; it will most certainly be needed to get through this film in one piece…