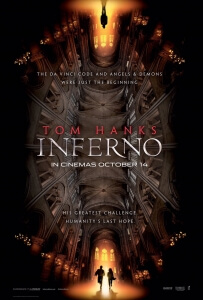 BASICALLY…: Professor Robert Langdon (Hanks) wakes up in a hospital room with no memory and the authorities on his tail, and must figure out a complex scheme to regain his freedom…

The only religious aspect of Inferno, the third film in director Ron Howard’s series of Dan Brown adaptations following the faith-based The Da Vinci Code and Angels and Demons, is the mere mention of Hell, as depicted in Dante’s infamous poem which this film borrows the title from. Other than that, everything from the previous films that amped up the religious conspiracies, from Jesus’ biological heir to a scandal in the Vatican, is side-lined so that Howard, writer David Koepp, and star Tom Hanks can make that ticking-clock action-thriller that they’ve always wanted to make, but couldn’t exactly find the right material to make it more ridiculous and convoluted than they wanted it to be.

Howard’s Inferno, based on Brown’s Inferno, itself based on Dante’s Inferno, is a glorious train-wreck that only people under contract would begrudgingly make for no other reason than to fulfil their contractual obligations, because there is nothing that can convince me that this was made by people who really don’t care about where the popularity for this came from in the first place. At least Angels and Demons came out only a few years after The Da Vinci Code; this one took seven years to get off the ground, and honestly by this point, does anyone still even care? Whether or not you do, Inferno is easily the worst, and also the most mesmerizingly dumb, out of Howard’s Brown adaptations so far, and it doesn’t need controversy to keep those flames alight.

Hanks is back as Professor Robert Langdon, but this time his reliably intellectual head is rendered useless as he wakes up in a hospital with severe head trauma and an inability to remember anything over the past couple of days. With barely any time to recover, he is suddenly attacked by an assassin posing as an Italian policewoman – oh yeah, we’re in Florence, Italy, by the way; and forgive that late piece of info, but if the film tells us where we are five minutes after being told, then I don’t feel quite as guilty – and he as well as young doctor Sienna Brooks (Felicity Jones) go on the run as they’re hunted by several taskforces, including the World Health Organisation.

Thought that was the entire plot? Think again, as Langdon then discovers that before his memory-loss incident, he was involved in a mission to find and contain a virus created by American philanthropist Bertrand Zobrist (Ben Foster), who before his recent demise wanted to fix the overpopulation problem by wiping out a good percentage of the population. To find the virus before later that day, when it is due to be unleashed, Langdon and Brooks must use clues that somehow tie into Dante’s Inferno and find the virus before it’s too late.

But if that wasn’t enough – you see what I’m getting at here? – there’s also a conspiracy within several government operatives, including the shady W.H.O head (Sidse Babett Knudsen), the shadier man tasked with finding them (Omar Sy), and the suited security chief (Irrfan Khan) who might be the shadiest out of all of them, who may or may not be seeking the virus for their own profit. And there’s plenty more plot to go on top of all of that.

Basically, Inferno has WAY too damn much going at the same time, which makes it nearly impossible to keep track. You feel almost as helpless as Langdon does with his worrying head trauma, but at least he has a medical excuse; we have to endure God knows how many pieces of information being explained to other characters, and by definition us as well, in a script that seems entirely made up of expositional speeches and nothing else. Because it is nothing but explaining, explaining and additional explaining, there is almost no room for the other more important elements that matter, like a coherent story or characters you actually care about; not that Langdon was a particularly interesting character to begin with, but even Hanks and his on-screen abilities can’t save his character from being a walking, talking Wikipedia page instead of an actual person we’re meant to like and root for. In fact, the only reason we’re told we should be behind him at all is because he’s played by Hanks, and certainly not from Koepp’s info-heavy copy-and-paste script.

Howard admittedly does try to make it all look as nice as possible, but while the landscape shots of locations visited like Florence, Venice and Istanbul might sway over people looking for their next holiday destination, they simply aren’t enough to cover the increasingly complicated and nonsensical plot that Brown had originally included in his novel. Plot twists come at us left and right, each one of them making less sense than the one before it, with some even contradicting the very nature of the plot itself, creating holes large enough to fit the entire Dan Brown bibliography into. You’ll have as hard a time trying to piece everything together as I did, not because the film is so entrenched in symbolic architecture and philosophical discussion – or at least it thinks it is – but because everything is executed so stupidly, so without caring about what came before it, and so idiotically directionless that it all falls apart at the bone.

Even if you’re a hardcore fan of Dan Brown, or any of Howard’s previous adaptations, you’ll be disappointed to know how catastrophically dumb the series has gotten that it might as well be the next level of Hell that Dante hadn’t even thought of. It should burn, baby, burn.

Inferno is easily the worst and most catastrophically stupid of Ron Howard’s adaptations of Dan Brown books, with a script made up entirely of exposition and far too much plot, eventually turning into something so dumb that it’s hard to enjoy even in a guilty way.