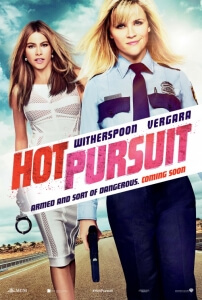 BASICALLY…: Uptight cop Cooper (Witherspoon) is assigned to transport a drug boss’ widow, Daniella (Vergara), across the border but both women are pursued by criminals and crooked cops…

In an age where female-led movies are finally getting the recognition and success that they deserve, along comes something like Hot Pursuit to ruin the moment with how backwards it is in regards to furthering the opposite sex.

It is especially disheartening when you learn that not only does it headline two genuinely talented actresses – Reese Witherspoon and Sofia Vergara – but it is also directed by a female director, Anne Fletcher (of The Proposal and 27 Dresses “fame”). It is disheartening because any criticism about a movie like this that is very female-centric can so easily be seen as casual sexism, as in “oh, this movie isn’t funny or good, ergo all women filmmakers and actresses aren’t funny or good.”

Nothing could be further from the truth – it’s just the movie that we’re casually aggressive against, in many more ways than simply being unfunny and terrible.

You get the feeling that even Fletcher must have been aware of how clichéd and tired the plot is – it’s the same old “cop and crook team up to avoid criminals and corrupt authorities” plot from many buddy action movies, only here done with women – because everything feels sped up as we move from plot point to plot point without a rare moment of breath, as though she’s trying to rush past them to get us to the end credits. In that regard, we’re thankful because nothing on-screen is worth caring about for an hour and a half; not the plot, not the action set pieces, and especially not the characters. You’re basically sat there for the entire running time trying to play a game called “Try To Be Invested”, and ending up losing every time.

The thinness of the plot is really so it can give way to as many crass jokes as it can, but the problem is – as you might expect – none of them are funny. We don’t mean that the majority fall flat with the occasional breakthrough gag, either; literally NOTHING in this movie makes you laugh, not even giggle slightly at the banality of it. This is a serious laugh-free danger zone that the actors are so desperately trying to mine in order to get a laugh, but in doing so are making themselves look worse in the process. Witherspoon and Vergara, two talented comedic actresses in their own right, are saddled with criminally unfunny material and seriously struggle to get a laugh out of it for the sake of the audience; Witherspoon in particular, having recently garnered critical praise and even an Oscar nomination for her leading role in Wild, feels like she’s been brought back to that dark period of her early career where everything was Legally Blonde 2  and Sweet Home Alabama, and constantly feels like she’s much better than this by now.

The film’s biggest sin, outside of it being extremely unfunny and forgettable as a movie in general, is how it takes its USP of it being an action crime comedy with women and uses it to push the female sex back a good few decades. The fact that they are women is entirely what defines them, from being uptight and humourless (Witherspoon is introduced running after a man that bailed on a date) to being shrill and consumerist (shoes are a plot point. SHOES!!!), or at least that’s how women act according to the two male screenwriters (honestly, does that really surprise anyone?). It falls for many gender stereotypes that date back to the 1950s, and is a creepily damning reassertion of women’s apparent place in society. That’s what makes the film a truly ugly one, especially in a year where films with genuinely great female characters like Inside Out, Mad Max: Fury Road and Spy are doing huge business with critics and audiences.

Thank goodness that Hot Pursuit has not caught on as well as those films have, but we still can’t help but feel bad about it, because it could possibly mean fewer films with female leads in the future. But as long as any of them aren’t as backwards as this one, then it’s a prospect worth mourning for.

Outside of being thoroughly unfunny and instantly forgettable, Hot Pursuit is a terrible example of a female-driven action comedy where gender stereotypes threaten to push female expectations back a few decades and leave a false impression that women aren’t funny, which is made more excruciating given the genuine female talent involved.