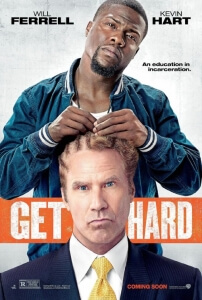 BASICALLY…: When wealthy stockbroker James King (Ferrell) is wrongfully convicted of fraud and embezzlement, and sentenced to ten years in prison, he enlists the help of car washer Darnell (Hart) – who King incorrectly assumes to be a former inmate – to help him survive behind bars…

After its recent debut at SXSW Festival drew controversy for its blatant racism and homophobia, Get Hard seems to have incurred the wrath of critics and certain audiences everywhere. But is it earned?

On paper, it doesn’t look that bad; the basic premise of a guy getting advice on how to survive prison lends itself to some amusing gags thanks to its original and interesting set-up (unless you count Rob Schneider vehicle Big Stan which, let’s be honest, none of you would), and the casting of both Will Ferrell and Kevin Hart, two funny actors with impressive credentials and raw talent, is an inspired stroke of genius. Something this high-concept should be steered as efficiently as possible in order for it to reach its full potential – however, the film never reaches those heights and is weighed down by an overabundance of cheap gags that hardly ever lift off the ground.

There are some jokes that do work, and when they do they can bring about a good few chuckles, even though most of them are plastered throughout the promotional material. Ferrell and Hart have a decent comic chemistry, and both manage to gain some kind of sympathy even though some of their motives and thinking patterns are questionable to say the least. Ferrell, for instance, isn’t playing the same kind of character you’d expect from Anchorman or Step Brothers, but is instead aiming for something a bit more wide-eyed and naïve, especially when it comes to making his racist assumptions of Hart’s character that ultimately drive the plot. You can argue that makes him more idiotic than, say, Ron Burgundy and in some cases that can be correct, but Ferrell does retain that natural comedic energy he usually uses to carry a film like this. Same can be said for Hart, who is clearly revelling in his career boost and here thankfully steps up his game from the rubbish The Wedding Ringer.

However, the sad truth is that not even Ferrell and Hart can really save the majority of this film’s gags, as they descend further into offensive and uncomfortable territory with its targets primarily being both the black and gay communities. Regarding the former, if you wanted to make a film that furiously debunks the racist assumptions that Ferrell makes about most black people either being criminals or being carted off to jail at some point in their lives, then it might be a good idea to not have every other black character outside of Hart and his family be a gun-toting criminal or poverty-stricken citizens that hang out in Subway. This is a film that suggests that every black person has at least one relative who’s a gangbanger, such as Hart’s cousin Russell (played by rapper T.I.) who seems to be moulded out of every negative stereotype drawn up by the media. It makes for a very confusing message, that racist stereotyping is wrong yet it exists anyway, which makes one wonder if there was something else that got lost in translation.

The homophobia, however, is even worse; a lot of the film’s gags surprisingly centre around prison rape, which is already an uncomfortable notion in and of itself because at the end of the day, no matter the gender or circumstances, it’s still rape. The film treats it like the worst thing in the world, but it soon becomes clear that the aim is not necessarily towards incarcerated felons; in fact, the film decides that ALL gay people are disgusting creatures that should be shunned forthwith. One scene that cements it, where Hart takes Ferrell to a gay bar to learn how to perform fellatio, hinges on the supposedly-comedic fact that gay sex is the vilest thing ever created, and it’s extremely unsettling that a major studio release, in 2015 no less, can still stoop so low in its portrayal of gay characters.

To call Get Hard non-PC is a huge understatement, but while it’s not as bad as Unfinished Business – after all, it’s still competently made and actually has a story, characters and jokes (even though they’re as crass as previously described) – it’s still a massive disappointment for what could have been a very special movie.

Get Hard squanders its high potential and inspired pairing of Will Ferrell and Kevin Hart in a comedy that sadly relies far too heavily on crude and offensive stereotypes, including blatant and toxic examples of racism and especially homophobia, which crush and destroy any credibility it tries to retain.