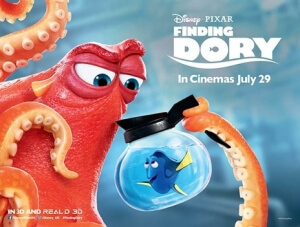 BASICALLY…: On a mission to find her parents, forgetful blue-tang fish Dory (DeGeneres) ends up in a public aquarium which poses a link to her forgotten past…

At last, we have ourselves a good Pixar sequel that ISN’T Toy Story!

While Monsters University was okay but forgettable, and Cars 2 was… well, Cars 2, Finding Dory – the sequel to the animation studio’s 2003 mega-hit Finding Nemo – is the first Pixar follow-up outside the world of Woody and Buzz Lightyear to not only match the quality of its predecessor but also work as a genuinely strong standalone, introducing new areas of drama, comedy and all-round entertainment that make it a thematically stronger and more poignant film than even sequel-phobic cynics might be expecting.

Taking place one year after the events of Finding Nemo, blue tang sidekick Dory (Ellen DeGeneres) – who, if you recall, suffers from a severe case of short-term memory loss – suddenly remembers that she has a mother and father (Diane Keaton and Eugene Levy) who she hasn’t seen since she was an impossibly adorable baby fish (seriously, try to watch the numerous flashback sequences WITHOUT having your heart melt). With her friend Marlin (Albert Brooks) and his son Nemo (Hayden Rolence, replacing a now-too-old Alexander Gould), Dory sets out into the big blue ocean on a mission to find and reconnect with them. However, just as you’re starting to think that it’s going to be nothing but a mere rehash of the first film, they quickly arrive at a Californian marine institute where they run into numerous characters including a near-sighted whale shark named Destiny (Kaitlin Olson), two Cockney sea lions (Idris Elba and Dominic West), an insecure beluga whale named Bailey (Ty Burrell) and, most prominently, a camouflaging seven-legged octopus named Hank (Ed O’Neill), all of whom are instrumental in helping Dory get closer and closer to the parents she once forgot she had.

A recurring theme throughout both of these films is that of disability, with not just Dory’s memory problems but also Nemo’s small and flappy “lucky fin” as a result of a birth defect. It’s not often that we see an ongoing series of films, for children no less, which puts disabled people in the spotlight as the main characters, and it is an encouraging notion that their characterisations always tend to come first instead of what handicap they happen to have. In this instance, however, Dory’s constant amnesia undoubtedly takes centre stage, but in fairness it is handled a lot more seriously as opposed to last time, when it was played more as a source for comedy. For instance, we get to see just how much of an impact her problem has had on her life and the lives of others around her, from Dory growing up lonely and eternally lost, to her parents expressing concern about their daughter growing up with her condition, and it’s truly heart-breaking stuff instead of just another variation on the same joke. Whether or not you tolerate Dory as a character, regardless of her disability, you can absolutely identify with her quest and find yourself gripped as she appears to be getting either closer to, or further away from, her goal, and the strong writing as well as DeGeneres’ sparky vocal performance gives the character such levity without having her be the butt of so many jokes; instead, we find ourselves feeling sad when she is sad, laughing when she is laughing, and so on. As a lead character with a disability, Dory is absolutely one of a kind.

As we’ve come to expect with Pixar, the animation is simply incredible; beaming with colour left and right while retaining strong atmosphere that compliments the mood of the scene perfectly, it is pure organic eye candy that never loses its sweetness factor. They have even managed to make the effect of fish above the surface look more polished, as opposed to looking more like gummy sweets like they did in Finding Nemo, so nothing looks or feels out of place within the frames of the world that director Andrew Stanton and his loyal team of animators have set out to create. There are also a lot of fun sequences, including one with a baby stroller, plenty of strong humour from several characters and sight gags (and sometimes even vocal gags, specifically a cameo as a certain actress playing herself in a very unique and always funny way), and a strong amount of drama, especially as it deals more with Dory’s past and her inability to properly remember due to her unfortunate condition. This is easily Pixar’s strongest non-Toy Story sequel, and will become the family favourite of the summer without question, leaving The Secret Life of Pets and many other mediocre animated movies in its dust.

Although Finding Dory is indeed a very good film and definitely worth checking out whether you have children or not, it leaves one wondering: where does Pixar go from here in terms of sequels? Of the five they have released so far, only three have been successes, while the other two have been either forgettable or Cars 2; and at the moment, they have Toy Story 4, The Incredibles 2 and – sigh – Cars 3 in development. According to reports, they have no current plans to do any more after that and will focus more on original content, so for now it seems their days of returning to worlds they already created are numbered. But no matter how those in-development sequels turn out, if they are anything like Finding Dory then – unlike the lead character’s memory – they will be truly unforgettable.

Finding Dory is Pixar’s strongest non-Toy Story sequel to date, expanding on its vast oceanic world with new locations, new characters, and expectedly stunning animation, while also handling the difficult subject of disability to an emotionally satisfying note of perfection. It’s guaranteed to be the family hit of the summer, and for good reason…