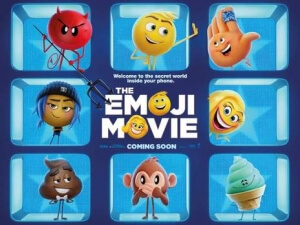 BASICALLY…: A “meh” emoji (T.J. Miller) goes on a quest that takes him across the smartphone, in a bid to rid himself of his many emotions…

There are not enough poop emojis in the world to describe how crappy The Emoji Movie is. As of this review, its Rotten Tomatoes score is at 6%, and for a damn good reason. For comparison, last year’s equally-despised animated film Norm of the North currently sits at 9%, which begs the question: how bad is it if 94% of critics agree it’s worse than Rob Schneider voicing a twerking polar bear?

The answer, it turns out, is pretty bloody bad indeed. So bad, in fact, that I can hardly think of any other film I’ve seen so far this year that’s made me more miserable and less hopeful about the current state of studio filmmaking, and keep in mind I also sat through CHiPS a few months ago.

Every single criticism and forewarning of its many atrocities are accurate, and a lot of it can be directed towards what it calls a “plot”. It is a Frankenstein’s Monster made up of several plot beats and gags from much more beloved animated hits like Wreck-It Ralph, Inside Out, The LEGO Movie and even Sausage Party (the latter of which makes me wish to the highest heavens this also ended with a massive emoji orgy… an “emorji”?), specifically the one where an individual that’s different in a conformist society – in this case, a “meh” emoji named Gene (T.J. Miller) who somehow can express all sorts of different emotions, which doesn’t bode well for a texting app where everyone must act like how they’re literally programmed to act at all times despite only needing to when at work, just one of the many bits of information that doesn’t make any sense – that must then go on an epic adventure to rid themselves of said problem, and blah blah blah Hero’s Journey etc. Throw in some crass jokes that a writing student could fix in no time flat, one or two annoying comedic sidekicks (most notably a walking abomination of a giant hand that’s voiced by James Corden), some uninspired attempts to appear creative, and voila! You have yourself a lazier version of any of those other films, and one that’s not only far more insulting to your intelligence as an audience member but also one that doesn’t even have the talent to do something with its stock clichéd plot that could really help it stand out.

It earns zero points for creativity, and though it shows some semblance of ideas at certain points they are so quickly discarded to make room for the next poop joke that it’s not even worth acknowledging their initial promise as ideas. It also somehow earns negative points for failing to even have a good sense of humour about itself, as the jokes – or more accurately, what the 50-year-old writers of this film consider to be jokes at the expense of their niece and nephew’s smartphones – all fall flat from the very first groan-worthy pun onward, and even get a little stereotypical now and then to piss you off even further (have I mentioned yet how the sushi emoji are all Japanese, and speak and act as such?). With a much more competent set of writers, there could have been a lot more going for these jokes since, even though it’s a pretty dumb idea right from the get-go, the foundation is there to make something truly satirical about our over-obsession with apps and phone updates, maybe even a strong social commentary on how they are beginning to take over our lives; but nope, it’s far more concerned with having this aggravating James Corden hand bounce off the walls and throw up a piece of candy corn (and then proceed to eat it again), and trying to sell you as many apps as it can.

That leads us into one of the film’s biggest undoings, specifically how it’s not so much a film but an extended advertisement for all the latest apps you can download onto your phone right this second. The product placement in this film, for established apps like Candy Crush, Just Dance, Instagram, Dropbox and others, is beyond blatant, and serves as a kind of uncomfortable brainwashing for young children who now want nothing more than to download said apps and waste away their parents’ battery life playing them, just like the cute movie told them to. Not since The Internship have I seen a film give in so much to its central product, but at least that film only had the one brand name it was trying to sell, whereas this sells many, and is despicable for doing so in a film meant for family entertainment and not for a pitch meeting. There were parts during these obvious product-pushing scenes that I legitimately got so annoyed and angry that Sony, once again, had screwed the pooch so hard its puppy offspring had come out as stillborn… which is a rather dark image, I know, but that’s what this movie has driven me to.

It’s a draining experience, one that leaves you far dumber than you did going in, and I can’t imagine what it must be like for young kids dragged to this by their parents or guardians, who may interpret this as some sort of psychologically-testing punishment for taking the last biscuit from the tin. For everyone, though, it is an utter waste of your precious time, and why on Earth would you want to at all spend it at a film with unfunny jokes, bland and annoying characters, a plot that borrows from several much better animated films, and some of the most painful product placement I’ve seen in years?

Please don’t go to see The Emoji Movie, easily the worst film I’ve seen so far this year; I’d use the poop emoji as a closing argument, but I feel that more than enough has been said already about this piece of absolute garbage.

It’s The Emoji Movie… what the hell else were you expecting?!