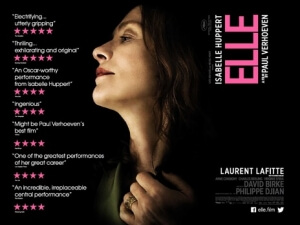 BASICALLY…: After being attacked in her own home, a woman (Huppert) begins an odd obsession with identifying her attacker and pursuing something far more troublesome…

It’s difficult to be awed by a film that literally starts in the middle of a rape scene, but somehow director Paul Verhoeven – the director of films like RoboCop, Total Recall, Basic Instinct and, erm, Showgirls – makes it a film you cannot take your eyes away from, because he’s got a powerful weapon in his artillery: Isabelle Huppert.

The French actress, who was nominated for several awards for her lead role in this film, including the Oscar for Best Actress, and even won a Golden Globe for her efforts here, is simply phenomenal in the film, and deserved every bit of recognition in this awards season just gone. She plays Michèle, the woman whose opening rape by a masked assailant becomes the catalyst for everything she does from there onwards. Instead of alerting the authorities, she casually continues on with her life as though nothing happened, including managing a video game developing company, having an affair with the husband of her best friend, and dealing both with her self-absorbed mother and her son whose pregnant girlfriend continuously humiliates and emasculates him at every turn. Her search for the attacker, however, soon becomes dangerous and explicit, especially when she eventually finds out who was behind the mask.

A very different type of rape-revenge film, Elle – based on the novel Oh… by Philippe Djian – is less I Spit On Your Grave and more Black Swan, in the sense that it’s far more focused on character and disturbing ideals than actual revenge. Michèle is a very questionable character, teetering on the edge of being morally worse than her own rapist; she’s cold-hearted, self-pitying and endlessly bitter, not least because she’s hated by many of her work colleagues, and also because she is the daughter of an infamous serial killer, with certain pieces of evidence implying that she may have been involved with her father’s crimes. For this latter reason, she is instantly reluctant to notify the authorities after she is sexually assaulted, and in her vigilant quest to identify her attacker manages to alienate everyone around her, including friends, family, neighbours, co-workers etc. The film is an intense, often humorous, character study that explores the inner cravings of a disturbed post-feminist woman like Michèle, and Verhoeven keeps the cards as close to his chest as he can, with every scene offering a tantalising new reveal about this person who keeps getting more and more difficult to like, even after she is raped. As with Basic Instinct, the director manages to keep things fairly erotic without ever exploiting its own twisted sense of rape culture; and while rape itself is a horrific crime that nobody should ever be subject to in real life, the film doesn’t take any moral stance on that hot button issue to leave things a bit more ambiguous in its messed-up-ness, making it a cautiously entertaining ride.

It’s a return to form for Verhoeven, who after his Dutch-language drama Black Book over ten years ago has been operating under the radar ever since, probably waiting until most people had forgotten about Showgirls. But with Elle, he’s made his strongest film in decades, blending intense human drama with the kind of erotic thriller that David Cronenberg probably would have made immediately after his film Crash. Of course, it being rape, the eroticism element of it is extremely subdued, and very often uncomfortable to watch (as it bloody well should be; it’s rape, after all), but again with an actress like Huppert in the lead role, it suddenly becomes a piece of beautiful performance art that just happens to be centred around a disturbing subject. Huppert has honestly never been better than she is in this film, commanding your attention in every scene she’s in (which is roughly 95% of the film if not the full 100%) and mixing heavy pathos with bleak comedy and unnervingly sub-human tendencies, which really dig towards the molten centre of this seriously messed-up woman that Huppert uncannily slips into with great ease. It is a performance of sheer bravery and is probably the most risqué piece of acting you’ll see in ages, one that combines the phenomenal abilities of Huppert and also the strong and focused direction by Verhoeven; it is worth seeing just for this performance alone.

The film will most certainly not appeal to everyone, given its questionable stance on the film’s heavy topic of sexual assault and victimisation, and expect quite a few conservative audience members to react with great disgust, or actual victims to feel uneasy all throughout. After all, no matter what the quality of the film is like, it’s still a film about a woman being viciously raped, which is already an unsettling thing to watch and is instantly a topic for debate amongst the more thoughtful of audience members. However, the disturbing content in this movie is handled extraordinarily well, allowing a whole new side of the rape-revenge drama to be explored that is both fascinating and intriguing enough to maintain your full attention all throughout the film, not to mention the absolute knock-out performance by its leading actress who, after decades of being in the business, is set to gain even more of a following thanks to her fearless, complex and dangerously poignant acting chops on full display here.

It may not be for everyone, but if you’ve got the stomach for it Elle is definitely worth your time.

Elle is director Paul Verhoeven’s strongest work in years, featuring a magnificent, tour-de-force performance by Isabelle Huppert in the lead role, who is so powerful and magnetic here that the film’s far heavier and more taboo subjects of rape and victimisation somehow feel much easier to swallow, despite them still being tough subjects as a whole, whatever the quality of the film may be.