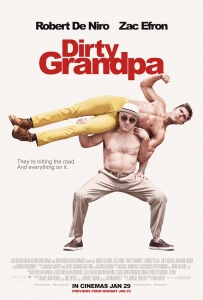 Robert De Niro, the man considered to be one of Hollywood’s most respected actors, with two Oscars to his name, a frequent collaborator with the likes of Martin Scorsese and David O. Russell, is now in a film where, on several occasions as a running joke, he sticks his thumb up Zac Efron’s rear end.

We’d lament on how the mighty have fallen and all that, but given his declining filmography over the last few years – Rocky & Bullwinkle, Little Fockers, New Year’s Eve, Grudge Match, and that’s just to name a few – that would be somewhat redundant. That being said, however, Dirty Grandpa is the kind of film that makes even those films look civilised, and sets the bar even lower for such an established actor that it’s honestly hard to even watch.

It’s standard sex comedy fare, with added geriatric presence; widower Dick (De Niro) heads to Daytona Beach to get his dick wet, with his straight-laced grandson Jason (Efron) in tow as he prepares for his wedding. Pretty much everything you’re guessing in your head about where this all leads to is exactly how it transpires in the film, leaving this hollow story not only predictable as holy hell, but also an insufferable bore; roughly five minutes in, we know exactly how it’s all going to end, but the film is still under the illusion that we’re not smart enough to comprehend that, so it fills the entire movie with non-sequiturs like getting into fights with gang members, and enough coarse language that it feels like a kid in their mid-teens scribbled this script onto a comments section on Pornhub.

And guess who’s stuck with saying all of this crass dialogue (here’s a hint: the film’s called Dirty Grandpa)? From the moment we first see him having a bit of alone time with a porno and a Barcalounger – an image that nobody wants to visualise in their heads, let alone see on-screen – De Niro is playing as unappealing and obnoxious a character as you can get, talking directly from his penis about nothing but how much he wants to have sex now that his wife has passed away from cancer… which kind of makes his journey rather more loathsome, when you really think about it. Even more disappointing, this isn’t even one of those De Niro performances where he’s just slumming his way to an easy paycheck; he seems to just bathe himself in the character’s hedonistic ways, throwing out vulgar swear words left and right – including a dropping of the n-word at the “approval” of a black audience – smoking and drinking endless amounts of drugs and booze, insulting tons of women and gay people with sexist and homophobic slurs, and creepily lusting after significantly younger college girls like the equally libido-driven Lenore (Aubrey Plaza, who is way too good for a role like this, where she’s sexualised to a point of self-parody, and yet somehow ends up being one of the film’s few highlights). None of this is entertaining or funny in the slightest, unless the thought of an old man swearing up a storm is somewhat hilarious to you, and watching an actor like De Niro willingly indulge himself in such depravity is honestly rather depressing.

To be fair, though, the film makes it easy for De Niro to be this crass when pretty much everything and everyone around him is stooped to his level. The stereotyping of black and gay people is extremely uncomfortable – sometimes all at once, with Brandon Mychal Smith playing a particularly prissy supporting character who looks like an extra from the movie Mannequin – as is its frequent sexism and viewpoint of women as mere trophies or ball-busting shrews that apparently have no brains to share between them. Once again, the only woman to truly leave an impression is Aubrey Plaza, but even then she’s uncomfortably sexualised, leading to a slightly creepy final scene that’s made even creepier by the following post-credits scene.

Director Dan Mazer, whose last film was the far superior I Give It A Year, has also worked on several Sacha Baron Cohen comedies like Borat, Brüno and Ali G, so it’s understandable to see where such crass comedy can originate from, but at least those instances were actually funny. Here, he’s working from a script by a first-time writer (surprise) that has no idea how to write the kind of vulgar sex comedy that’s both sexy and funny, with characters that are worth supporting and aren’t instead a bunch of insufferable douchebags that make the ones in Bad Neighbours look like reasonable human beings, that doesn’t rely on heavy clichés and aggravating dick jokes – though surprisingly, none surrounding the fact that De Niro’s character’s name is actually Dick; we guess the movie didn’t want to stoop THAT low – and doesn’t degrade one of Hollywood’s finest actors to, once again, poking his thumb up Efron’s arse.

But then again, maybe this is just down to personal tastes. Anyone who’s a sucker for this kind of offensive raunchy comedy, like the ones from the 1980s, will probably find some joy in this movie, and if you do find it funny then nobody has a right to judge you for it; like whatever you want, and don’t be put off by anyone who belittles you for it. However, the purpose of this review is to explain, in full detail, why we’re not really one of those people, and we just thought that Dirty Grandpa, regardless of its purpose to offend as much as possible, just wasn’t that pleasant an experience for us. Take it for what it’s worth, but this is one grandpa we’d much rather leave in a home.