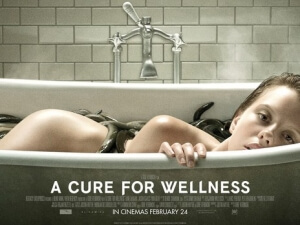 BASICALLY…: A young company executive (DeHaan) travels to a mysterious spa in the Swiss Alps to find his CEO, but soon discovers some rather unsettling methods used by the doctors…

After a short period of polarising audiences and alarming Disney executives with his dark, overlong and needlessly complicated Pirates of the Caribbean and Lone Ranger films, Gore Verbinski is finally back to making the kind of films he honestly SHOULD be making: dark, overlong and needlessly complicated movies for a far more adult crowd, instead of whoever he was aiming for with The Lone Ranger.

But A Cure For Wellness is a bit of an odd beast, in that it sets up a mildly interesting concept, only for it to slowly come undone by its bloated running time (146 minutes! I guess he’s just never going to make a film under two and a half hours again, at this rate) and a narrative that constantly stalls just so it can get to that length. Yet, at the same time, the film is never really boring, even when a lot of it doesn’t make much sense, and there are some positives to it that put it above something like The Lone Ranger. Does that make it good? Not really, but you won’t feel entirely ripped off if you just see it the once.

The set-up is that ambitious young businessman Lockhart (Dane DeHaan) is sent to retrieve his boss from a mysterious spa in the Swiss Alps, where everyone from the staff to the patients is harping on about a “cure” that they are taking to relieve them of any further illnesses. When Lockhart becomes a patient there himself after a car accident, with his leg in a cast and only squeaky crutches to get himself around, he starts to discover that the true intentions of the spa, and its director Dr. Volmer (Jason Isaacs), are – in true Gore Verbinski style – seriously twisted and sinister to the extreme.

Naturally, this kind of plot has been done before in many other psychological horror/thriller films like this, where a seemingly sane protagonist must travel to an institute filled with crazy people only to then succumb to its sinister ways. Films like Shutter Island and Gothika instantly come to mind, not to mention at least one season of American Horror Story, which this film definitely feels like a rejected storyline for that. But what holds this one together, for the most part, is that it is surprisingly very nice to look at; say what you will about Verbinski’s unhealthy taste in disturbing visuals, especially in Disney films, but he’s always managed to make his films look absolutely stunning through some excellent cinematography (here provided by Bojan Bazelli, who worked with the director on The Ring and The Lone Ranger) and a creepy, gothic tint that gives it a creepy personality.

There are times when you just want to put the film on mute and just focus on some of the surreal imagery this film provides, because it’s far more engaging and interesting than what’s really happening in the story, which aside from not being entirely fresh is also just all over the place, and I reckon that’s down to its bloated running time. There is really no reason for this film to be nearly two-and-a-half hours long, but it is, and as a result the film tends to stall or stop dead in its tracks for scenes that could be summed up in just a few short sentences, yet seem to go on for what seems like forever. Characters are set up as though they’re going to be important later on, yet we hardly see them again afterwards; certain plot details are left ambiguous or dropped altogether, raising more questions than actually answering them; and the film suddenly turns into something far more cartoonish and silly in its third act than the rest of the film was implying, making it a tonally unbalanced movie as a whole. There are also decisions that DeHaan’s character makes that really don’t make much sense; after getting more of an idea of what the institute is really doing, he’s still dumb enough to just drink anything the staff offer to him (I mean, of course we all need to rehydrate ourselves every so often, but when you’re in this situation where you really can’t trust anybody you can probably skip the drinks for a short while).

So yeah, there’s a lot about A Cure for Wellness that just doesn’t work, but again not enough to outright say that this was a terrible movie. The visuals in this movie are just stunning to look at, and Isaacs is having a lot of fun playing the villain in this (I don’t think it’s a spoiler to say he’s the bad guy, because it’s Jason Friggin’ Isaacs who apparently has it in his contract to play the villain in almost everything he’s in), and honestly the movie would almost be worth recommending just for those two highly enjoyable assets. But at the end of the day, it’s still a heavily flawed movie, which outstays its welcome with that unnecessarily bloated running length, doesn’t make a whole lot of sense with its complicated and sometimes overly silly  plot, and just reminds you of other films or series of TV shows that have done this kind of story much more effectively, and memorably.

In terms of Verbinski movies, A Cure for Wellness is more tolerable than, say, The Lone Ranger was, which lest we forget had a scene of William Fichtner cutting out a human heart and eating it. On that subject, how is it that THAT scene shows up in a 12A Disney film, and a not an 18-certificate adult horror like this one? Truly, we’re living in strange times.

A Cure For Wellness has a lot of problems, from a nonsensical and unoriginal story to its needlessly overlong running time, but the stunning visuals and an enjoyably villainous turn by Jason Isaacs make it worth at least one viewing, and a marked improvement for director Gore Verbinski after his disastrous previous film The Lone Ranger.