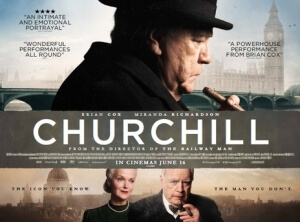 BASICALLY…: Winston Churchill (Cox), exhausted by years of war, is forced to come to a decision about giving the go-ahead to the D-Day Normandy landings…

For Father’s Day this year, I thought I’d do something a little different with this review of Churchill; something that incorporates my own father into the proceedings.

I actually saw this movie twice over two days, the first on the Friday release date so that I could review it objectively, and then the next day with my father, who is a hardcore admirer of Winston Churchill and the extraordinary life he led, to see what he thought of it and whether we agreed on any mutual points for and against the film. Spoiler alert: we didn’t end up disagreeing on much, as we both found it to be a rather noble, but flawed, exploration of the man behind the myth that was Winston Churchill.

The set-up is that it’s June 1944, mere days before the launch of Operation Overlord and what would later become known as D-Day, when the Allied forces took to the beaches of France to liberate it from the Nazis. Everyone in the high command, from US General Dwight D. Eisenhower (John Slattery) to British Field Marshall Bernard Montgomery (Julian Wadham), is eager to get the ball rolling on the attacks… except for Churchill (Brian Cox), who is reluctant to give his approval to the assault since he is still haunted by memories of his failed assault in Gallipoli during the First World War. The film is basically Churchill trying to overcome his fears and outdated ideas of what a war leader should be, and not only come to terms with the D-Day mission going ahead but also with the fact that he’s more of an inspirational figure to people than he thinks.

From my first viewing of the film, I found it to be a fairly decent movie that was boosted by its magnificent ensemble cast, led by the magnetising and powerful lead performance by Cox, but seemed to lack much of a punch in the storytelling department, feeling very bare and not as insightful as it really could have been. The second time, however, was slightly different; my initial thoughts on the film remained the same for the most part, but with the addition of having my father there with his own encyclopaedic knowledge of Churchill himself, I found it to be a slightly more rewarding experience. Moments that I thought were a little corny and sentimental the first time around I suddenly found myself choking up at, and I could really get sucked in a little more to the historical contexts surrounding it because I had someone with me who knew far more about this man’s life than I do, which made it a fascinating experience for both of us since it was well directed and solidly written enough to stir some powerful emotions without feeling too forced or manipulative.

Both of us could agree that a strong reason for a lot of this investment really was the ensemble cast, wherein every single performer did excellent work and brought even the corniest dialogue to life in ways the writer and maybe even the director could never have imagined. It goes without saying that Cox is absolutely fantastic as the title character, as he really digs deep into this very complex human being and finds the humanity and vulnerability in him that I’ve yet to really see from any other actor who’s been fortunate to portray him in the past (from Albert Finney to Richard Burton to even Christian Slater… don’t ask about that last one), and unless Gary Oldman delivers a tour-de-force as the character in Darkest Hour this coming awards season, this will be a Churchill portrayal to beat for a long while. Meanwhile, the rest of the cast do some exceptional work in even the most limited roles, notably James Purefoy who despite only appearing in a handful of scenes as King George VI delivers one hell of an impression in a stand-out scene that is both beautifully acted and passionately written. But this is Cox’s show, and as the most celebrated Briton of the 20th century he’s absolutely phenomenal.

However, even my father could agree on a few sticking points that I had on the film even from the first showing; it is rather light in the narrative, and though it does the preferred biopic method of taking one event from the person’s life and focusing on just that, I felt it could have done a bit more to explore who Churchill really was, and a bit more about his past that has yet to come to light on the big screen. There are also a few dialogue scenes that feel repetitive, and nearly always end with hardly anything being learned or radically different, making it a bit redundant in places.

But really, both of us came to the conclusion that despite its flaws, it got across its intentions rather well, and that the actors really elevated the solid-enough material to some rather high emotional levels, allowing us to engage in this story more than we could have hoped. While it isn’t perfect, it’s a solid film about Churchill and the man that he was as opposed to the icon everyone knew him as, and more importantly it gave me a rare opportunity to see a film on the big screen with my dear father. Happy Father’s Day, Dad, and I’m glad you enjoyed it as much as I did.

Churchill takes an emotionally engaging angle towards telling the story of Winston Churchill’s response to the upcoming D-Day attacks, which allows lead actor Brian Cox to dig deep into the complex character and find some humanity to latch onto, delivering a fantastic performance in an ensemble cast filled with excellent performances, and while it may not entirely excuse its somewhat light narrative or inability to fully explore the central figure and his past, it’s a solid enough historical film that’s easily the best choice to take your father to for Father’s Day, as I did mine.