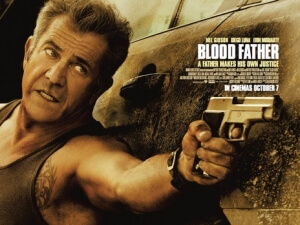 BASICALLY…: Ex-convict John Link (Gibson) must protect her estranged daughter (Moriarty) from gang members that are trying to kill her…

Mel Gibson hasn’t been around lately in the world of film, and I think we all know why. But after fleeting appearances in B-movies like Machete Kills and The Expendables 3, which were apparently all he could be approached to do, it seems that he’s finally getting back into people’s good books, mainly because nowadays there’s ANOTHER hot-tempered maniac in the news to get worried about.

Not only is Gibson back in the director’s chair for the forthcoming war drama Hacksaw Ridge, but he’s also returned to the big screen for his first lead role in years, as a hardened soul who must protect a loved one in director Jean-François Richet’s action-thriller Blood Father – and watching him in this movie, I feel like I can feel proud to say that it’s good to have Gibson back in films like this.

He plays John Link, an ex-con on parole who lives in an isolated trailer park where he runs a small-time tattoo business. One day, he unexpectedly receives a phone call from his daughter Lydia (Erin Moriarty), who has been missing for years after falling in with a criminal gang, and soon finds himself targeted by irate gang members who are after Lydia for killing their leader, and Lydia’s lover, Jonah (Diego Luna). Naturally, John must protect his daughter at any cost, even if it means violating his parole and driving across the country to get away from the threat as far as possible, which as it turns out might not be as easy as first thought.

Say what you want about Mel Gibson, but the son of a bitch knows story structure he is so much fun to watch in a film like this. His gruff nature, even unhinged, has been his thing for years, and sure it may have gotten him into hot water more than once, especially this last decade, but something about all that really works for him here, more so than many of the other stuff he’s done lately. I would even go so far as to say that Gibson is due for a resurgence in the industry which ingested him and then spat him back out, and this is a good place for him to begin his rebooted career. Gibson’s role here is not that different from one that Stallone, Schwarzenegger et al would play at this stage in their own careers, but while those would be very much movie-star performances, there’s a true grittiness that Gibson brings that really takes the whole thing to a fresher place, kind of like Liam Neeson in Taken if he could literally kill anyone he wanted at the drop of a hat. He is a lot of fun to watch, and it really makes you think about how much someone like Gibson could thrive from a late career of playing these hardcore, badass dudes who couldn’t care less about what other people think of him (it’s almost like it’s art imitating life, or something).

Not only that, but the film itself is surprisingly strong in its depiction of the estranged relationship between father and daughter. Both of them are damaged in their own unique way, with Gibson repenting for his past crimes and Moriarty’s Lydia struggling with drug abuse and unfortunate criminal ties, and they end up coming together to make this rather soothing double-act where all they want is the best for each other, but they just have to overcome some incredibly difficult obstacles before any of that. As the film goes on, the plot does start to become a little more conventional, but by then you’re already drawn in by the unexpected emotional power that these two have together, that none of that really matters. You just want to not only see Gibson save the day and destroy the bad guys, but also end up back on good terms with the child he’s not been in contact with for years.

The filmmaking is decent enough, and although the film suffers from a little too much of the old shaky-cam method, making it hard to watch some action scenes unfold, Richet keeps things going at a leisurely pace, while always ramping up the brutality and hardcore nature of the evil thugs that are after our two heroes. This is a film that definitely needed an adult rating, and it luckily keeps to that while never going too far for the audience to become uncomfortable.

On the whole, I was genuinely surprised by how much I ended up enjoying Blood Father – I went in expecting a good throwback action-thriller with a former star like Mel Gibson headlining, and I got that while also getting something a little more for the price of one. Not bad for Mr. Sugar-Tits.

Blood Father manages to exceed expectations with not only presenting the kind of satisfying action-thriller that Mel Gibson excels at, but also something a little more heartfelt and sincere than first thought.