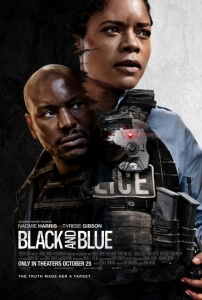 BASICALLY…: A rookie cop (Harris) finds herself on the run from corrupt cops after she captures them committing a murder on her body cam…

Last year, director Scott Speer released two films within the span of a few months; first, there was the absolutely atrocious Status Update, and then there was the Bella Thorne romance Midnight Sun, which wasn’t great but compared to the director’s previous film it might as well be Gone With The Wind.

This year, it’s a case of déjà vu except this time, it’s with director Deon Taylor; earlier this year, he revealed to the world the awful and unintentionally hilarious stalker thriller The Intruder, and now he’s back with a movie that’s the complete opposite of that; Black and Blue, a suspenseful action-thriller that actually feels like it was made by someone with a rough idea of how to direct scenes, actors and everything else, and perhaps even more shocking, it’s a pretty entertaining sit.

Just like with Speer last year, I have to wonder if there are in fact two separate filmmakers named Deon Taylor, because when you look at both this movie and The Intruder back-to-back, they feel like they were made by wildly different people, but at least with Black and Blue you can tell which one they were more passionate about making.

The film stars Naomie Harris as Alicia West, a rookie New Orleans cop who witnesses first-hand the sharp divide between the city’s police department and the impoverished community from which she originally hails, which has ostracised her for her decision to join the force. On a routine patrol, she ends up witnessing a group of police officers executing some drug dealers, all of which is recorded on her body cam, prompting lead detective Malone (Frank Grillo) and his team of fellow corrupt officers to capture West and obtain her body cam. On the run, West soon finds that seeking shelter in a community that no longer regards her as one of their own, and where she can’t really trust anyone – except for shop owner Milo (Tyrese Gibson), who seems to be the only one to actually help her – is extraordinarily difficult.

It’s an interesting take on the classic “corrupt cop” action movie motif, as it’s one that really takes into account themes such as police brutality, racial discrimination and divide, and even class warfare. Taylor clearly wants to address these topics in a profound way without sacrificing the entertainment value of his story, and he does so while maintaining a strong level of suspense in scenes where the paranoia runs through thick and without compromise. Just like Alicia, you never really know who to trust until all the pieces are in place, and it’s that intensity that drives the plot, leaving you with the harrowing feeling that maybe, just maybe, this is one of those films where the villains get away with it, because they really could do at any given moment here. It certainly doesn’t set a new high standard for these films in modern storytelling by any means, but the fact that it’s there at all and done by a filmmaker who clearly holds these themes close to his heart, it definitely feels like an action movie with a lot more on its mind than just shoot-outs and the occasional car chase.

The acting, too, is solid; Naomie Harris carries this movie through every suspenseful scene, even as her character gets more and more burnt out as she keeps running from the bad guys – she spends a majority of this movie with a raspy voice, having endured a full night shift before being shot at and many other traumatising things – and Frank Grillo gets to have fun as the menacing villain on her tail. However, turns by Tyrese Gibson and Mike Colter – the latter turning up a bit later as a local gangster who is led by Grillo to believe it was Alicia who crossed his path – shouldn’t go unnoticed either, with Gibson getting a couple of harrowing scenes where he gets to show a bit of powerful emotion, and Colter is great in a role that sees the actor play wildly against type as someone who can be truly terrifying.

It’s not a perfect movie, since it does tend to borrow a little too heavily from other police thrillers such as Training Day, and a couple of lines focused on the overarching themes of injustice feel a little too on-the-nose, but it still works rather well as a solidly entertaining movie that’ll definitely hold your attention and never let you get too bored. But again, I’m just shocked that a movie like this came from the same person who made The Intruder; never in a million years would one think that the guy who let Dennis Quaid go completely nuts in one of the year’s most over-the-top performances in a movie that’s not a comedy, would also be capable of making a gritty police thriller with genuinely outstanding performances and a real sense of suspense and even terror. My theory is that Taylor was given the greenlight by Screen Gems to make this movie, under the condition that he direct a trashy stalker thriller for them first (both movies were made by the same company, so the theory checks out), but at least Taylor had the guts to not only make the film he wanted to make be an entertaining ride, but also make the film he was contractually obligated to make a movie that’s so bad that it’s completely unforgettable. You have to admire the guy for putting effort into both movies, albeit for wildly different reasons.

Black and Blue is a gritty crime action-thriller that’s suspenseful, well-acted and most of all entertaining, even when tackling heavy themes in a light but never dull manner, which at times leaves you shocked that the same director who did this solid movie also did The Intruder, one of the year’s most laughably bad movies, and which this movie runs complete circles around.

Want to decide what the movie’s like for yourself?
Check out Black and Blue showtimes in London
via