Birdman, Or (The Unexpected Virtue of Ignorance) (Review)

Birdman, Or (The Unexpected Virtue of Ignorance) (Review) 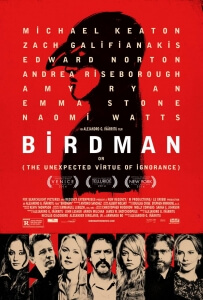 The first time we see Michael Keaton’s Riggan Thompson, the central figure in Birdman, or (The Unexpected Virtue of Ignorance) – to give its full title – he’s in his theatre dressing room wearing only his underwear, sitting cross-legged with his back to us. He also happens to be hovering in mid-air. Meanwhile, a gravelly off-screen voice (also Keaton) starts to complain about their current environment – “smells like balls,” it exclaims – and how both Riggan and the voice are both bigger and better than this. It’s a brief yet sharp battle of the ego that appears to be altering his own perception of reality… and it never stops from that moment on.

We REALLY mean that it never stops; Birdman is held together by its much-talked-about “one-shot” camera work – that is, several continuous sequences edited and seamed together to appear as if there are no cuts whatsoever – which is consistent throughout (almost) the entire film, a feat not achieved on such a high scale since Alfred Hitchcock’s Rope. It allows us to see the world through Riggan’s eyes, which is constantly on the move without a moment to catch breath and piling up towards a potential disaster. It is a captivating, if exhausting, perspective and we are left to wonder how this guy can live his entire life at this pace when everyone else – including us – can barely keep up, even as cinematographer Emmanuel Lubezki’s glorious imagery attempts to keep everything at bay. This is something that director Alejandro González Iñárritu manages to achieve without many of us even realising it; by placing us in Riggan Thompson’s shoes we are suddenly given a glimpse into the mind of an egoist and how it can keep going and going and going like an Energizer bunny on crack cocaine. The most logical outcome would be to fear this man’s ego and the damage it is doing to himself and those around him, and in some respects we should – but we cannot help but admire it all the same, like a strange case of Stockholm Syndrome where our captor can be dangerous but also determined and motivated all the same, even if it is to feed his own self-satisfied needs.

Although the healthy combination of Iñárritu and Lubezki paint the portrait of Riggan Thompson beautifully, capturing every push and shove his character endures from a wide range of obstacles – from Edward Norton’s frustrating method actor brought in at the eleventh hour to Lindsay Duncan’s bitter theatre critic determined to negatively write about Riggan’s Raymond Carver adaptation regardless of its quality – it is the man himself that ensures there’s a painting to craft in the first place. Keaton is simply unbelievable in the role, the kind that is instantly career-defining and destined to stand proudly among his other iconic roles such as, lest we forget, Tim Burton’s Batman which the titular fictional superhero is clearly a riff on. Each member of the ensemble is fantastic, with standouts including Norton, Emma Stone as Riggan’s pining daughter-cum-PA, and Naomi Watts who sheds all memories of the infamous Diana with an understated performance as a struggling actress; but Keaton leads the pack with an iron fist, commanding the screen unlike any other actor you’re likely to see all year, delivering a true tour-de-force as the egoist battling the ego with the most dangerous of appearances and influences.

Special mention must too go to Antonio Sanchez, whose jazz drumming composition – sometimes performed on-screen – gifts the film with a vivid and eccentric personality as well as guides us through this surreal yet inviting world that Iñárritu and company have concocted. Though his score has been disqualified from Oscar consideration on the grounds of its predominant use of classical score snippets (a big no-no in the Original Score category rulebook), Sanchez’ score clearly dominates the film regardless and proves that certain music doesn’t necessarily need awards to live forever.

Ultimately, Birdman manages to display both style and substance without letting either one fully dominate. Its editing, camera movements and lighting choices will wow the eyes, but its complex studies on the human ego and the current state of Hollywood celebrity will amaze the brain. It is a wondrous technical achievement in its ideas and, above all else, execution which has rightfully gotten every single critic in the world currently at its feet in praise, including this one. As for its true awards potential, it will certainly have a major presence in many categories come Oscar time, with at least Keaton’s bid for Best Actor all but confirmed to pay off big-time. Time will tell if the film as a whole can go the distance, or if Richard Linklater and his own mini-epic has too many fans within the Academy to give it much attention, but let’s not go too far just yet – much like the inner thoughts of Riggan Thompson, Birdman, or (The Unexpected Virtue of Ignorance)’s ego cannot and should not be indulged too much at this point, even if it is a fascinating ego to behold.

Birdman, or (The Unexpected Virtue of Ignorance) is a marvellous piece of art that deserves to be experienced by anyone who loves the craft; from Emmanuel Lubezki’s stunning and ambitious cinematography to Alejandro González Iñárritu’s firm direction to, most of all, Michael Keaton’s towering performance, it simply soars.