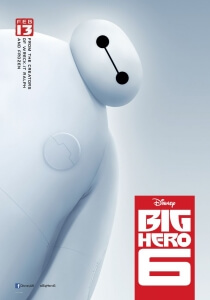 BASICALLY…: In the city of San Fransokyo, teenager Hiro (Potter) and robotic creation Baymax (Adsit) form a group of heroes that must stop a city-wide threat…

Disney has finally gotten its groove back in the animation department, with hits like Tangled, Wreck-It Ralph and especially Frozen not just making serious bank but also connecting with audiences on an emotional level better than they have done in years. Part of this is thanks to the hiring of Pixar head John Lasseter as its chief creative officer during Disney’s acquisition of the computer-animation titan in 2006, who has since steered the studio that once hired and fired him through the pathway of hit after hit. Within the almost-decade of that purchase (has it really been that long?!) Disney has also acquired many other properties including Marvel, which at the time was loudly detested by fans who feared that the family-friendly Disney would soften their favourite heroes and make them cuddly, accessible and – most importantly – marketable enough to dampen their bad-ass impact.

Big Hero 6, based on a little-known Marvel property, is the closest we have gotten to seeing those fears realised – but even then, is it that bad?

The answer, if you want something more straightforward, is no; but at the same time it doesn’t quite reach the levels set by its previous CG Disney features or even anything to come out of Marvel’s gates. It aims to be its own thing which is admirable, but there’s a little something that’s missing which is preventing it from truly being great. It follows both a standard Disney plot and a standard superhero format at the same time – a young protagonist, devastated by the loss of certain family members, finds solace in the grand and whimsical adventure they partake in; it just so happens that what they find solace in here are a bunch of robotic suits and tech-enhanced superpowers. It’s not that either one of these standard templates is portrayed poorly here, although they may be a bit too familiar with some older members of the audience.

The younger audience members, on the other hand, will certainly find a lot to enjoy here; there are some good morals for them to take away as well as some fun characters to experience the journey with, and there is a nice amount of heart to provide a warm feeling inside. Then, of course, there’s the film’s official mascot Baymax, an inflatable robot designed to act as a caring nurse with the voice of the bald guy from 30 Rock (no, not Alec Baldwin…). His is a very unique design and it is fascinating to watch him function; special props to the animators for having him move exactly as he’s supposed to, very stiffened but eerily and appropriately robotic. Scott Adsit somehow has the ability to provide a wide range of emotions in the character’s one-note and monotone voice, which is pretty impressive for something that doesn’t even have a mouth. As is, it is a very lovable robot with its heart in the right place without ever being annoying; and, for the Disney geek inside this reviewer, it’s interesting to see how they have managed to somehow insert a supporting character that looks like a snowman into two animated movies in a row now – and, funnily enough, it still makes sense if people ask others if they want to build a robot as opposed to a snowman (though we think that those who STILL do that should just let it go…).

Back to the movie, and what doesn’t necessarily make it stand as tall as other Disney animated films of late. The more obvious one is that, as far as supervillains go, this isn’t one of their most interesting creations; his diabolical plan is a little underwhelming and even the reveal of his identity isn’t that much of a shock given his suspicious circumstances earlier in the film. But maybe the reason lies in its inability to latch on to the pure creativity that the environment suggests; the setting of San Fransokyo allows for some cool visuals, but in the end the film doesn’t do much with them in terms of story or even action; if anything, they’re just background filler, and for such an interesting idea of mashing these two cultural cities together it’s disappointing when most of the action takes place in abandoned warehouses, island facilities, mansions and another giant building that’s not even within the city. Post-Man of Steel, people have been complaining about how large cities always seem to get destroyed in the final superhero battle but this is one of the odd cases where it’s kind of called for, especially when it offers something as imaginative as this.

But as is, Big Hero 6 really isn’t that bad of an overall movie. It does have its major flaws and setbacks compared to previous Disney or even Marvel outings, but it does offer something that many thought we would get in a Disney/Marvel film but didn’t expect to be this warm: a hug in the midst of the superhero carnage.

While Big Hero 6 isn’t as fresh as Frozen, Wreck-It Ralph or many of Disney’s other recent animated outings, nor does it truly latch itself on to the many creative possibilities it suggests, it’s still a charming and fun family superhero film that’s heavy on heart and ripe with appropriate sentimentality. We’re already predicting Baymax toys to sell like firecrackers over the next twelve months in your local Disney Store…