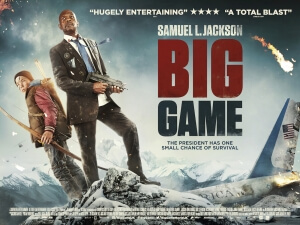 BASICALLY…: When Air Force One is shot down in the Finnish wilderness, the President of the United States (Jackson) must team up with 13-year-old hunter Oskari (Tommila) to stop the terrorists from finishing the job…

What should have been a camp classic instead feels more like a missed opportunity – this is the best way to describe Big Game, a film that hypes up the idea of Samuel L. Jackson being the President of the United States but never knows exactly what to do with that idea.

That, however, isn’t what the film is truly about – the true protagonist is Onni Tommila’s thirteen-year-old hunter Oskari who, encouraged by his father and fellow tribesmen in the forests of Finland, sets out on a traditional rite of passage where he ventures out on his own and hunts wildlife to bring back to prove his manhood. He just so happens to come across Jackson’s POTUS – “Bill”, as he prefers to be called – when he lands in the middle of nowhere in an escape pod when Air Force One is attacked by terrorists. From there, the two unlikely companions must dodge all incoming threats ready to take out the most powerful man of the free world.

That set-up alone should equal out to a B-movie goldmine, embracing its inevitable cheesiness and sheer bonkers nature to a point where it can be tons of fun to watch. Sadly, it never gels together as well as it should and it all ends up as a bit of a mess.

Director Jalmari Helander, perhaps best known previously for his festive Finnish-language horror-comedy Rare Exports, never finds the right tone for his scenes; when something should be so over-the-top and entertainingly silly, it’s played fairly straight-forward and po-faced which dampens the enjoyment of it and leaves itself open to be unashamedly nitpicked. One later action sequence, for example, sees Oskari and Bill huddled up inside a life-sized cooler (don’t ask) as they tumble down cliffs into some rapids to temporarily escape the bad guys; this should be a tense and exciting set piece, but it’s staged and presented in such a way that all you’re really thinking about is how these two haven’t broken their necks or any of their bones in the process. A later scene, set inside the sunken remains of Air Force One, has a cool set-up and an even cooler design (come to think of it, a lot of the scenery both indoors and outside is fairly nice to look at) but again Helander doesn’t seem to have a clue what to do with any of it, failing to take advantage of its many possibilities. As an action film, it’s very saturated – Jackson doesn’t even get to say the entirety of his signature “mother…” phrase, a depressing side-effect of it being 12A.

Even when the film takes momentary pauses to develop character, Helander doesn’t really make it work. The connection between Jackson and Tommila, though both are serviceable with what they’re given, isn’t as strong as it should be, and it can come across not as awe-inspiring but just awkward. The scene where they first meet is cute, a slight riff on E.T given the design of Bill’s escape pod, but as a duo they just don’t work well together, and Jackson at times seems lost without much direction as to what to feel about this kid.

Much of its supporting cast is not given much to do, if not anything at all; Felicity Huffman, as a Pentagon official watching the action unfold on a screen (like a lot of these other supporting players), might as well not have been in the film at all, while Jim Broadbent with an undeterminable American accent (is it Midwestern? Southern? Canadian?) makes the most out of his eating of a sandwich for the majority of his screen time (that, and a bad-ass moment at the end which comes completely out of nowhere).

The only time that the film truly delivers exactly what it promises, that being an over-the-top slice of action with a bizarre sense of humour, is one of the final set-pieces, easily the biggest and most explosive out of the lot, which features perhaps an on-screen death worthy of one of The Expendables. It’s here where Helander finally gets what the film should be, even if it is for a moment. Such a shame he couldn’t find a way to incorporate it into the rest of Big Game.

All we have to say is, for a movie where Samuel L. Jackson is the President of the United States, we’re pretty underwhelmed.

Big Game is never the B-movie classic that it should be, wasting great action potential thanks to Jalmari Helander’s unfocused and too-serious direction whilst the overall corniness is just, erm, corny.