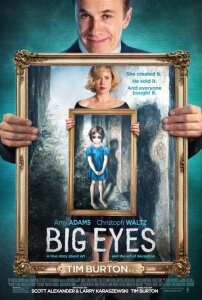 Every filmmaker needs a breather from his usual style every now and then, and nobody deserves it more than Tim Burton at this point. These past few years have been decidedly lacklustre for the filmmaker, with his Alice in Wonderland and Dark Shadows in particular bombing with audiences and even his most hardcore fans; so it was probably the most sensible thing in this situation to do away with the usual gothic overtones, the usual casting of Johnny Depp and Helena Bonham Carter, and the usual Hot Topic-inspiring get-up for his next feature. Sure enough, Big Eyes is his most un-Burton film in years – but is it an overall step up for the troubled director?

It’s certainly a peculiar story told in a very entertaining way, and the grounded nature of it all compared to past works like Alice in Wonderland allows room for a little more humanity to shine through its characters. Burton appears to have a steady eye when taking on a more traditional story like this, attempting to find a smooth middle ground between story and character which he just about achieves, even if it’s by no means a completely accurate position.

Writers Scott Alexander and Larry Karaszewski, who provided the script for one of Burton’s most renowned films Ed Wood, once again tell a story of an artist and their work who managed to get in favourably with the public eye despite consensual criticism. It’s a surprisingly relevant story nowadays, especially in the film industry, because the film makes it clear that the “Big Eyes” series of paintings – painted by Margaret Keane (Amy Adams) with husband Walter (Christoph Waltz) taking all the credit – only sell not necessarily because they are masterpieces but because they are simply popular with the public. When one thinks back to sucky blockbuster franchises like Transformers and Twilight, they became huge hits not because they were any good (which they definitely weren’t) but because they were based on sources that were already popular, and like drones we paid money to see them regardless of their quality, if only to buy into the fad. That’s what the “Big Eyes paintings turned out to be, just a fad; something that both Jason Schwartzman’s snooty gallery owner and Terrence Stamp’s fierce art critic point out endlessly in this film. Oddly enough, they seem to be the only voices of reason in the entire film, even as Karaszewski and Alexander write them to be the cynical naysayers in the story of another person’s oppression.

Speaking of whom, Adams is much more nuanced and quiet than you’d expect; her Margaret Keane is riddled with naivety and ambition, from blindly going along with the central deception that takes up much of the film to finally deciding to fight for her own voice in the film’s bafflingly-strange climactic court room showdown. She does a fine job in the role, enabling us to find the sympathy within such a closed-off character and knowing just where to stay grounded without going over-the-top or cartoonish in approach. That is saved for Waltz, who seems to be a mad dog let off the leash here in one of his most extreme examples of overacting; it’s entertaining to watch him be like this at first, but by the time we get nearer to the end you just want to strangle this guy as he dines on even more scenery. His casting can be a bit off-putting as well, only because his trademark thick Austrian accent doesn’t match the real Walter Keane’s profile (he originally hailed from Nebraska; in the film, you’re almost waiting to hear about his origins in Germany). It’s not an awful performance by any means, but it’s not particularly a great one either, especially for a two-time Oscar-winner; you just don’t see an actual character here, rather Christoph Waltz being Christoph Waltz. Tarantino showed the world he can be awesome, while Burton has shown the world we can have too much of a good thing.

Waltz’s constant over-performing does sadly eclipse Adams’ more subtle performance, and much of the rest of the movie’s quieter achievements. Although this may be his least-Burtonesque movie since Big Fish, one can still recognise trademarks of the director like attention to detail in the production design – certain suburban streets look like they came direct from the set of Edward Scissorhands – and even the strange, surreal imagery he is perhaps best known for, such as a few instances of people’s eyes being visually enlarged to match the paintings of the title. It’s definitely clear that Burton is revelling in telling a much quieter story this time round, even if it is a flawed creation with one or two creative liberties – the closing trial took over three weeks before a verdict in real life; in the film, it seems like it all took place in one day – that for the most part don’t entirely take any of the entertainment factor.

It’s an interesting true story brought to mad life by an eccentric auteur, and while Big Eyes may not rank among the director’s best work like Ed Wood does, it’s a refreshing sigh of relief to know that the director who botched Lewis Carroll’s most famous story still has a spark of passion left in his eyes.

Big Eyes is a welcome return to form for director Tim Burton, who tackles a much smaller story that can be an entertaining and thought-provoking parallel in today’s war of commercialism vs. actual storytelling in the film industry. However, one too many contrivances and an irritatingly-OTT Christoph Waltz overshadows some of its more obvious strengths, including a nuanced and watchable Amy Adams. But hey, at least it’s a step up from Dark Shadows…