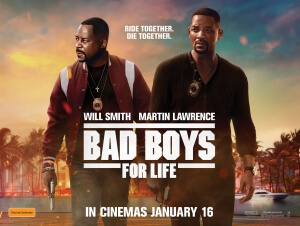 BASICALLY…: Police detectives Mike (Smith) and Marcus (Lawrence) team up once more to take on a mob boss hell-bent on revenge…

As divisive a figure like Michael Bay is, a lot of people can agree that two of his most comprehensible movies are the first two Bad Boys flicks. The first one, released back in 1995, is probably Bay at his most restrained, holding back on many of his trademarks that would later become synonymous with his style – explosions, scantily dressed ladies, juvenile humour – and providing more of a straightforward, and decent enough, action thriller. Bad Boys II, unleashed eight years later, definitely feels more like a traditionally bombastic Bay film, but in terms of actual entertainment value I would honestly go with the second one because it’s more stylised and fun, despite the over-the-top nature of it all (but hey, if Danny Butterman from Hot Fuzz ranks it with Point Break as the quintessential action flick, then that’s all the praise you need).

Funnily enough, though, the best one out of the lot happens to be the one that Michael Bay didn’t direct; Bad Boys For Life, the long-in-development third instalment of the action franchise, is instead overseen by Belgian duo Adil El Arbi and Bilall Fallah (billed as Arbi and Fallah in the opening credits), who definitely replicate Bay’s visual style down to a tee – even to a point where Bay himself has a cameo – but beyond that, they bring something to the series that Bay never could, and that was an actual heart.

In the film, we find Miami P.D detectives Mike Lowrey (Will Smith) and Marcus Burnett (Martin Lawrence) on different paths as they approach middle-age; while Marcus is eager to finally retire and settle down to care for his new grandchild, Mike refuses to acknowledge that his best days are behind him, even going so far as to dye his goatee a darker colour. However, when Isabel Aretas (Kate del Castillo), the vengeful wife of a slain drug lord, escapes incarceration and sends her ruthless son Armando (Jacob Scipio) to assassinate Mike, the two partners must team up once more to take Isabel and her son down, with the assistance of the more youthful members of the police department’s “AMMO” unit.

Arbi and Fallah do not waste their first major opportunity in the big leagues, going beyond just simply making a Michael Bay movie clone and actually doing something with these established characters, giving them actual weight for the first time rather than just generic action movie heroes that Bay presented them as. They really play with the fact that both Will Smith and Martin Lawrence are getting older, with Lawrence being more accepting of his fate as well as eager to retire and take care of his new grandchild, while Smith’s character seems to still be stuck in the same mindset that he was 25 years ago (to a point to where he even starts dyeing his goatee a darker colour). You might not think it with a Bad Boys movie, but there is some genuine drama to be explored with these guys being more and more accepting of their fate, without neglecting its strong sense of humour as well as the intense action that’s fun and – shock! – easy to make out what is actually going on. When it goes through those motions, it’s certainly ridiculous and over-the-top, but that’s exactly what worked about the previous two films (especially the second one) and this movie doubles down on everything that was actually good about them, and doing far less of what was more repulsive – I can guarantee, there are zero close-up shots of rat sex in this film, and no oddly-placed scenes of gay panic either.

It’s got action that stays consistently entertaining all the way through, taking breathers every now and then to calm the audience down enough before moving on to the next big set piece – something that the most recent Michael Bay film 6 Underground could actually learn from – and a few twists involving long-standing series favourites that are surprising and legitimately game-changing. Most of all, though, it’s just awesome seeing Will Smith and Martin Lawrence together again on-screen, and just like the rest of the film there isn’t a hint of laziness on their part; they both act like they legitimately want to be there, because they have been given the opportunity to expand on their characters for the first time, and to also finally let them mature from their “bad boys” moniker. They still have that electric chemistry together, which was always the shining beacon in all of these films, and they also fare rather well on their own too; Smith gives a far more compelling lead performance here than many of his other recent films combined, while Lawrence – in his first major leading role since 2011’s Big Mommas: Like Father, Like Son, which is incidentally the far inferior Martin Lawrence threequel – not only has impeccable comedic timing but also serves as a more humble moral compass than we’re used to seeing him play. Their performances are genuine, going neatly along with how the movie itself feels genuine, and not just a mere cash-in on a dormant franchise which this so easily could have been, but thank goodness that it wasn’t.

It also made me do what the other movies never really managed to do, and that was to make me want to see more of these guys in the future; as luck would have it, as I was exiting the cinema, I saw news that a fourth Bad Boys movie is officially in development which, as long as the same creative force behind this film is involved, I am now very much okay with – but maybe don’t wait another 17 years to make it, because I guarantee that nobody wants to see Smith and Lawrence wearing adult nappies while they’re shooting criminals.

Bad Boys For Life takes the very best ingredients from the previous two Michael Bay-directed movies – among them the fun action and impeccable chemistry between Will Smith and Martin Lawrence – and doubles down on them to make a satisfying new entry that’s very entertaining and also more mindful than the series has been allowed to be until now.

Want to decide what the movie’s like for yourself?
Check out Bad Boys For Life showtimes in London
via