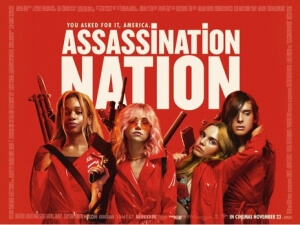 BASICALLY…: An unknown hacker exposes the many dark secrets of a small town, which brings about a sense of chaos and madness to its civilians…

Sam Levinson’s Assassination Nation is many things; it’s a stylish exploitation film, an ambitious attempt at social commentary, a feminist call to arms, a modern satirical update of the Salem witch trials, and a Purge movie – and that’s not even half of what this movie is. You put all those things and more into a blender, and you’ve created a pretty insane ride – but it’s one where you come out of it unsure of whether or not you even enjoyed the experience.

Set in the quiet town of Salem, Massachusetts, all is well until an unknown hacker begins exposing highly sensitive and personal information about various citizens, including the anti-gay mayor’s (Cullen Moss) secret stash of cross-dressing photos, the high school principal’s (Colman Domingo) innocent picture of his naked young daughter that immediately causes people to believe he’s a paedophile, and the various secrets of a group of local teen girls, including Lily (Odessa Young) and transgender Bex (Hari Nef). It is these group of girls that become a focal point for the town’s growing descent into chaos in wake of the hacks, and before you know it the entire town has donned masks and taken to the streets to cause chaos and demand bloody retribution from these girls – unless they have the courage to fight back.

Watching this movie, which is a surreal combination of all the things I mentioned a couple of paragraphs ago and more, I honestly had no idea what to make of it. On the one hand, it’s doing and saying a lot of stuff that’s pretty hard to watch – though don’t worry, the opening contains a “trigger warning” for all the things this movie contains, from homophobia to extreme violence – but on the other hand, it clearly has something it wants to say amidst all this chaos and the film takes a nobly unique path to get there; but then, on the third unseen hand (which you should probably consult a genetic scientist about), it makes little to no effort to actually go into detail about what it is trying to say, and just expects you to sit there and take all this madness while assuring us that there is a reason for all of this somewhere in there. The thing is, this movie comes across as so heavy-handed and pompous in its various messages that it comes up short on any real reason to care about any of this; many of the characters are thinly-written and fall back on basic stereotypes like the jock, the abusive boyfriend, the vapid and airy teenage girls et cetera, while the story relies heavily on shock tactics and incredibly mean-spirited behaviour which, regardless of what this movie is trying to say, makes it a lot more unpleasant and vulgar to watch than it is interesting.

On the flip side, if there were something genuine I can say about the film, it’s probably the most ambitious Purge movie yet made, which is a weird thing to say about a film that has absolutely nothing to do with that series of films. It’s around the second half when that mentality settles in, as people are going around suburban neighbourhoods wearing masks and doing some very illegal things such as torture and murder, only here the filmmakers think that what they’re doing is a lot deeper and smarter than it actually is (then again, so did the Purge movies, but at least they kind of knew they were meant to be big, bombastic exploitation films for the most part). Once it actually does get into a big, bloody showdown with guns aplenty, only then does the movie finally start to have an idea of what kind of film it really should have been in the first place, that being a gory and stylish exploitation movie you can switch your brain off and enjoy. Sadly, that is relegated to the final few minutes, and everything before then is a rather pretentious exercise in having people say and do some pretty horrible things without much in the way of substance to say or show, except that the director wants you to know how edgy he’s being by pushing the envelope in ways he thinks it’s never been pushed before, when really it all comes across as some rather alarming notes that an angsty teenager has scribbled down on their writing pad during English class.

In a strange way, I kind of understand the reason for this movie being made right now, in this unforgiving climate of hateful rhetoric where online secrecy apparently no longer exists, as well as the reason for why it was made, to be some sort of call to arms for the liberally oppressed as intolerance of all forms – including male entitlement, racism, homophobia, slut shaming, oversensitivity to the most inconsequential of things etc – takes over in the wildest and most violent of ways. Unfortunately, this movie’s entire reason for being is now null and void, since this debuted dismally at the US box office with a $1 million gross that placed it at number 15 on the weekend charts, and quickly fizzled out with a total gross to date of just over $2 million before exiting cinemas just one month after debuting. So, not only did nobody go to see what built itself up to be a timely and fiercely relevant message in these dark political times, but nobody even cares about what it has to say about anything. I know it’s unfair to judge a movie based on its financial performance, but when there is evidence that a movie-going public doesn’t want to listen to your insane and pseudo-intellectual ramblings, then take that as a sign that your message, no matter how well-intentioned, has become lost in the public consciousness amidst all the even crazier things that are happening in real life right now.

I’m sure that Assassination Nation will be one of those movies that gets a cult following in the coming years, but right now it’s a movie that doesn’t have much reason for being, and I can’t even bring myself to conclude whether I even liked it or not. Either way, it’s clear that nobody wants to see a movie like this right now.

Assassination Nation is a surreal, and not entirely successful, mixture of several identities fighting for domination in a movie that feels so pompous about its deep social commentary that it forgets to give us reasons to care, and it comes across as an angsty piece of teen fiction that nobody wants to read about in this day and age.