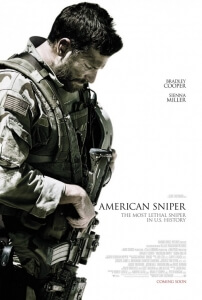 BASICALLY…: Heavily-trained US Navy SEAL Chris Kyle (Cooper), stationed in Iraq, builds a reputation as one of the most lethal snipers in American military history…

Somehow, Clint Eastwood has managed to release both his weakest film and his strongest film within the frame of one year – but whereas Jersey Boys was a bland, colourless and thoroughly unenjoyable adaptation of the popular stage musical, American Sniper is a far different beast altogether. Another adaptation, this time from the autobiography of the film’s subject Chris Kyle, it is a fierce, tense and surprisingly engaging telling of one of the deadliest snipers in US military history.

It will be easy for audiences to label it as The Hurt Locker if it were directed by the former Man with No Name, but it is just as fascinating and heart-stopping to watch as Kathryn Bigelow’s Oscar-winning film – however, some of the comparisons are warranted, given that both explore the mental stabilities and bloodlust of certain individuals fighting in Iraq and so forth. This film, however, takes into account a good chunk of Kyle’s life and presents it in a way that feels more natural than something like Unbroken with its own account of a war hero. Time is actually spent on Kyle as a character within the movie, with him interacting with various different people whether it’s his wife Taya (Sienna Miller) or his fellow comrades like a normal human being and not a construct of the heroic archetype. In that sense, he’s more interesting because he seems more like a real person rather than just a character, and Jason Hall’s impeccable screenplay manages to convey both the character and the situation accordingly to make him more human than people may realise.

Vital to ensuring that Kyle’s story is told as effectively as possible is Bradley Cooper’s lead performance, which is a harrowing triumph both mentally and physically. Gaining 40 pounds to play the role might not seem as ambitious as Jake Gyllenhaal’s dramatic weight loss for Nightcrawler, but it’s still an impressive physical transformation that really shows the actor’s commitment through and through into resembling the real-life figure as much as possible. Cooper has a natural on-screen charisma which enlightens even the most difficult character to like, and while this depiction of Kyle can at first appear to be bullish and brash to a point where comparisons to Raging Bull are appropriate he’s still written to be sympathetic and capable to a degree, which Cooper is able to demonstrate in ways that lead to this being one of the best performances of his career. Meanwhile, Miller – after being completely sidelined in Foxcatcher with a role that really could have been played by anyone – is given a fair chunk of material to work with, even if most of the film has her delegated to the side lines in the role of the worried yet supportive wife, which she manages to make watchable to the best of her abilities. She and Cooper share a nice chemistry with each other, which makes the later tension between them – inflicted by Kyle’s PTSD and emotional distance – all the more heartbreaking.

However, as engaging as its two leads are, it is Clint Eastwood’s direction that makes this film more special than it has any right to be. This is a rare film from the actor-cum-director that delivers a high quantity of tension and also an unapologetic account of extreme violence, the kind he hasn’t made since at least his Flags of our Fathers and Letters from Iwo Jima pairing. The above trailer is a closely accurate example of the tension that American Sniper delivers, leaving you on the edge of your seat anticipating what Kyle is going to do while he’s in position with his sniper rifle – there are even times when we find ourselves dreading the thought of what he is forced to do in order to keep his fellow soldiers safe. Eastwood, in a surprising and unnerving move, decides to not hold back on some of the more extreme cases of bloodlust; for example, a brutal al-Qaeda enforcer is shown using his signature weapon of a drill on a child – and yes, it is as every bit as gruesome and disturbing as you may think it is. By employing this borderline sadistic vision (done as tastefully as possible, mind) as well as a tight and flowing grasp on the overall narrative, Eastwood depicts one of the most brutal eras of combat in recent military history to an accurate and effective result.

Perhaps it sticks out as being one of his strongest films as a director in a while because it’s not like anything he’s done for the past few years. When you consider that most of his recent films have either been slow, bleak biopics like J. Edgar, Invictus and, yes, Jersey Boys, it’s refreshing that with a film like American Sniper he can still, even at the grand age of 84, surprise with just how ambitious and exciting he can be behind the camera. Thankfully, the film itself is strong enough to justify this claim, and allows it to be one of the director’s strongest works in years.

American Sniper combines the strong and surprising direction by Clint Eastwood, the effective lead performances of Bradley Cooper and Sienna Miller, and the three-dimensional and pleasing screenplay by Jason Hall, which altogether crafts both an unflinching account of the Iraq war and a stunning portrayal of one of the most lethal snipers in American military history.