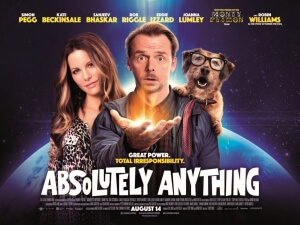 BASICALLY…: A group of aliens (Cleese, Palin, Idle, Jones and Gilliam) bestow upon random human Neil (Pegg) the power to do absolutely anything, to test whether the Earth should be destroyed or not…

You have a basic plot which, on paper, paves the way for many comedic opportunities. You cast a good bunch of actors, including Simon Pegg and Kate Beckinsale, alongside established comedians like Eddie Izzard and Sanjeev Bhaskar. What’s more, you reunite the surviving members of Monty Python, one of the most influential comedy troupes in history, in various voice roles; and, most sentimentally, it features the final voice-over performance of the legendary Robin Williams before his untimely passing last year. You have, in collection, a comedic gold-mine.

So why on Earth is Absolutely Anything almost entirely devoid of laughter?

Lots of reasons, to be exact, but let’s give you the run-down; Neil (Pegg) is a lowly school teacher and aspiring writer who seems unsatisfied with life. That is, until an intergalactic council of CGI aliens (voiced by John Cleese, Michael Palin, Eric Idle, Terry Gilliam and co-writer and director Terry Jones) randomly select him to have the power to do, well, absolutely anything; with the flick of his wrist, he can suddenly have a muscular body, have Eddie Izzard’s stern headmaster be nice to him all the time, and even have the faecal mess made by his dog Dennis get up on its own and flush itself down the toilet. Unbeknownst to Neil, however, the aliens are watching to see if he will do any good with his new-found powers, or else he and the rest of the planet will be destroyed. Will he eventually figure out how to use his powers for the better of mankind? Does this plot seem to get sillier and sillier with every passing minute? The answer to at least one of them is “yes”.

On the one hand, it is a very strange concept to behold, even for a film with Monty Python involved, so of course nobody’s going to even try and play it so seriously. However, there also needs to be a limit, even for a film entitled Absolutely Anything, and this is where the problems start to seep through the gaps. Jones, working on his first film as director since his 1996 adaptation of The Wind in the Willows, has decided that by having no boundaries for whatever his main character to wish for (he can even reverse bad decisions as though they never happened), the comedic possibilities would therefore be endless. In fact, it’s quite the opposite as they suck away any genuine tension or consequence, leaving the comedic set-piece without any real substance. For instance, a sub-plot which sees Neil will a fellow teacher to “worship” his friend Ray (Sanjeev Bhaskar) leads to him becoming a cult figure, and as it becomes more and more open to satire, not unlike Jones’ own Life of Brian, the less logical it becomes when you realise that Neil has it within his power to reverse it at any time. Maybe he’s secretly just a sadistic bastard who likes to see his friends be tormented by obsessive cult members, or at least that’s our personal head canon for why he doesn’t reverse it the numerous opportunities he can.

Not realising the limitations of this tremendous power is one thing, but Jones also can’t figure out basic strands of humour to keep its audience genuinely laughing all the way though. There are one or two moments that do actually raise a giggle, but for the most part not much of it is very funny, and you’re basically watching a talented group of actors who have proven to be funny in the past be stranded on-screen trying to mine the material for any sort of laughs. Pegg, who can sadly add this to his list of personal disappointments along with Big Nothing or Hector and the Search for Happiness, is stuck with an unlikeable character who gets more selfish as the film goes on, despite the actor’s good intentions; comedic legends like Eddie Izzard and Joanna Lumley are stuck with almost nothing to do, with the latter only appearing in two scenes as an entirely humourless TV personality diva; and even the Monty Python team seem to struggle for laughs, with one of their main jokes being that their English-translated names are Sheila or Janet. Everyone else, from Kate Beckinsale as the stock love interest character to Rob Riggle as the over-the-top psychopathic US military general who is stalking her at every turn, is just as underused.

But the most heart-breaking element of the movie is, as you may have guessed, Robin Williams’ contribution as the voice of Dennis, when Neil decides his canine buddy needs a voice. Like the rest of the world, we were extremely saddened by the comedic titan’s untimely passing one year ago, and to this day we are still trying to get over the fact that he’s not around anymore (seriously, try watching the end of Aladdin now WITHOUT getting a lump in your throat). This role is being billed as his final completed performance before his death, certainly his last comedic role, but what makes it even more depressing is that the fact that Williams’ material, well, just isn’t that funny. A lot of his dialogue seems to be aimed at wanting either biscuits or to “shag” Neil’s leg or anything else that moves, and it’s a lot of jokes we’ve heard before in other films with talking dogs so it’s nothing new here. Even Williams himself sounds confided in the recording booth, being unable to stretch out like he could do in other voiceover work in his career, and it really pains us to say this but you can hear the faint sadness in Williams’ voice in every bit of his dialogue – you can tell he’s not on high form while doing this and it’s more sad than it is funny. For a film to close out his extremely prolific career, it’s such a disappointment to go out on.

Absolutely Anything could have been a shining star of comedy, especially its talent – but instead, it’s a mere dead parrot.

Absolutely Anything feels like an extended pilot for a mediocre sitcom that would never get picked up, thanks to a disappointing lack of funny jokes and waste of a great comedic premise and cast, especially the late Robin Williams whose final role as a talking dog is a heart-breakingly poor conclusion to the late comedian’s strong filmography.