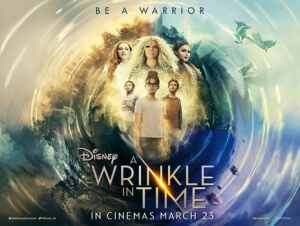 BASICALLY…: When she learns that her father (Pine) is being held captive somewhere in time and space, young Meg Murry (Reid) ventures across different landscapes to track him down…

A beloved children’s book from the 1960s; an influential director at the top of her game; the writer of the biggest animated film of all time; a diverse cast of talented actors; access to some of the best visual effects artistry one could find; and a studio whose hits as of late have been far greater than their misses. These are all the ingredients that have gone into what should be a certain hit for Disney, director Ava DuVernay, writer Jennifer Lee, and a cast that includes the likes of Oprah Winfrey.

So how on Earth has A Wrinkle In Time managed to come out this bad? I mean, THIS bad?!?

What should have been a slam-dunk has turned into a jaw-dropping trainwreck of a movie that somehow manages to be both certifiably insane and extremely boring at the same time, and neither one is healthy to experience because you’re spending the whole time just confounded at how much they’re screwing up here.

The plot centres around a young girl named Meg (Storm Reid), whose scientist father Alex (Chris Pine) has been missing for four years. Meg is a shy and introverted child, who struggles to fit in at school and at home finds it difficult to connect with her mother (Gugu Mbatha-Raw) and her adoptive and highly precocious younger brother Charles Wallace (played by a young scamp named Deric McCabe… we’ll get back to this kid in due course). Suddenly, out of the blue, three spiritual beings known as Mrs. Which (Winfrey), Mrs. Whatsit (Reese Witherspoon) and Mrs. Who (Mindy Kaling) arrive to inform Meg that her father is alive somewhere in the vast universe, and she, along with Charles Wallace and her friend Calvin (Levi Miller), sets out to find him on an epic journey that should be awesome, but instead comes off as such utter nonsense it’s almost unreal (well, it IS unreal, but you know what I mean).

I want to make it clear that I have not read the original book by Madeleine L’Engle on which this film is based, so I don’t know for sure if half of the sheer insanity in this movie actually comes from the source material, but from what I hear about the book it seems that a lot of details here were added or significantly altered to seemingly make it function as a movie (since I believe this novel was at one point in time deemed to be unfilmable). That said, whether or not you know this book inside out, you can tell that what you are witnessing on screen, in this $100 million budgeted Disney blockbuster, is the result of what happens when you give the asylum patients from Shutter Island a film camera, the use of award-winning visual effects studios, and a mountain full of cocaine. Some of the stuff I’m about to say may sound completely absurd, but I assure you it’s all in this movie; there’s a giant CGI Oprah Winfrey walking around looking like livestock courtesy of Alexander McQueen; you have a bug-eyed and erratic Reese Witherspoon talking to flowers and then turning into a flying cauliflower for no real reason and then never proceeds to do the same thing ever again in this movie; there’s also Mindy Kaling who speaks entirely in quotations, which includes working in a reference to, of all people, Chris Tucker; then there’s Zach Galifianakis who shows up dressed like a samurai and balancing on a rock, while acting like he couldn’t give less of a toss being on set; some of the human characters act and speak like they’re in a Last Airbender-era M. Night Shyamalan film, talking a whole load of pseudo-intellectual nonsense; and a third act which ends with a character being compared to, I kid you not, Oskar Schindler. Watching this movie, and the countless times it makes such baffling decisions, I was left just gobsmacked that anyone, especially a revered filmmaker like DuVernay, could let such madness be allowed to be shown in cinemas, and it’s not even the fun kind of madness; there were times where I was legitimately concerned for the mental well-being of the people who made this, because there is no way that anyone could have signed off on this without having their better judgement clouded by excessive use of cocaine and other hallucinogenic drugs, or again just their complete lunacy because I’m fairly certain they all came from the same mental ward.

This is also the kind of movie that, even if it weren’t as dangerously crazy as it is, still would have failed for a lot more reasons. This is by the same director who did Selma, one of the highest-acclaimed films of that year and was a focal point in the #OscarsSoWhite controversy after DuVernay and others failed to score Oscar nominations for their work on it, and here she is directing a lot of her actors like they’re community theatre performers; the direction in this movie is so awkward and stilted that, again, you’d swear this was a lost Shyamalan project that just happened to be made by someone else. I feel bad for a lot of the actors in this, especially Storm Reid who’s one of the only decent things about this movie (as is Chris Pine, who in this movie really reminded me of how good he is as an actor, even in something that’s far beneath his talents), because they are given such groan-inducing lines to say and direction that isn’t strong enough to make any of it sound credible. Although, there are a couple of actors in this movie I don’t mind singling out, for very understandable reasons; for one, Levi Miller – aka Peter Pan from that awful Pan movie a few years ago, which this movie may rival in terms of on-screen insanity – is utterly terrible in this, not least because he’s playing such a blank slate of a character who’s just kind of there and has no reason to really be involved in any of this, but also due to how he’s reacting to all this strange and magical atmosphere like he’s mildly surprised to come downstairs and find his dog has done a massive poo in the middle of the floor. I hear this character’s got a bit more life to him in the book, and after seeing how he is in this movie, I can believe it.

But now, I’ve really got to talk about Charles Wallace, the true “standout” of this film. If you ever watched Fuller House on Netflix and thought to yourself that you’d really like to see this kind of child acting in a multi-million dollar Disney film, 1) you’re a bleedin’ idiot, and 2) that has resulted in one of the most toe-curling and overwhelmingly obnoxious kid characters I’ve seen in a long time. I’ll give some credit to the filmmakers, it probably wasn’t easy to cast a five or six-year-old who can deliver the kind of intellectual and wide-eyed lines this character is given, and I don’t want to cast any bad light on young Deric McCabe himself because he’s just a little kid and everything, but I have never been more tempted to punch a six-year-old boy in the face than I have watching this annoying, bratty little shit on-screen in this movie. Every single line of dialogue this kid delivers on screen makes me want to scratch my ears off, because it’s delivered with such an irritating whininess that makes Jake Lloyd sounds like Dakota Fanning, and there’s something in the way he’s dressed to that kind of makes him look like a young Republican, which I don’t know why but makes me want to beat this kid up even more. Worst of all, he’s in A LOT of this movie, and often has more dialogue than Storm Reid who’s by far and away one of the better actors here, which means you have to put up with this frustrating character and performance that wouldn’t even be passable for a low-tier Disney Channel movie.

I know that I’m probably going to get a lot of hate for this review, especially seeing how there are quite a few people online who are responding much more positively to it (and as always, I’m glad you enjoyed something that I myself do not), but I don’t care; I’m proud to admit that I hated sitting through A Wrinkle In Time, and I will not apologise for how much I hate this absurd, awkward and just plain awful movie.

A Wrinkle In Time has all the ingredients for a sure-fire family hit, from a diverse and talented cast to a highly-revered director in the form of Ava DuVernay, yet it somehow wastes all of that in a feature-length display of dangerous insanity, filled with some jaw-droppingly mad imagery, awkward direction, and – aside from a couple of bright spots – largely terrible acting. Expect this to show up on a certain list at the end of the year…