A Walk in the Woods (Review)

A Walk in the Woods (Review) 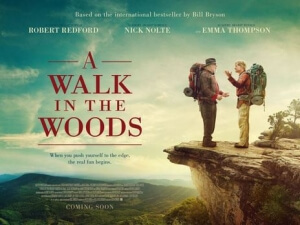 BASICALLY…: Aging author Bill Bryson (Redford) goes on a hike across the Appalachian Trail, along with his estranged friend Stephen Katz (Nolte)…

A Walk in the Woods is a film that should be studied in writing classes – but not for the reason you may think.

The film, a passion project that’s been years in the making by star Robert Redford and based on the bestselling book by author Bill Bryson (whom Redford portrays in the movie), is an essential example of telling a true story through a visual medium that, no matter how interesting or special it may be to certain people, can completely fall apart like a Jenga puzzle in the path of a jet engine if there isn’t a good enough script to support it. You can have people like Redford, Nick Nolte and Emma Thompson within the cast, you can showcase the gorgeous scenery of the Appalachian Trail, but if there is never a chance to care about anything within a single page of dialogue or scene description, then those elements don’t even matter; it all falls apart, and you’re stuck watching a much inferior movie than it probably deserves.

Said trail is what’s being trekked by Redford’s Bryson and Nolte’s Stephen Katz (a pseudonym directly from Bryson’s book), but the movie doesn’t want to focus itself on the compelling and agonising efforts of the men brave enough to try and walk across 2,200 miles of pure American wilderness; instead, there’s <adopts South Park Rob Schneider trailer voice> wacky hijinks, like escaping an annoying fellow traveller played by Kristen Schall, Nolte’s bunkbed falling onto Redford, and Nolte seducing a married large woman from a laundromat, by fondling her underwear and calling himself a “pantie-ologist”! Whuh-oh, things are sure crazy round here, aren’t they?! Derp-de-derp-de-derp – rated PG-13 (well, it’s not but it might as well be)!! <ends voice> Ugh. Uuuugh. Seriously, we understand that Bryson is known as a humourist, but the way it comes across in this film is like a rubbish sitcom layered with fat joke, old person joke, fat joke, sex joke, fat joke, over and over again with none of them being funny or even leading to any kind of payoff. This director, by the way, previously worked on projects like Dunston Checks In and License to Wed, and boy can you tell because the humour in this movie is on par with a chimp wearing lipstick or crazy Robin Williams priest; the script certainly wasn’t good in the first place, but the direction makes the cringe-worthy naffness stick out like a sore thumb.

However, the comedy – as insufferable as it can be – would have actually been okay if it was happening to people we were interested in or within such an awe-inspiring landscape, but that’s not even the case here. Redford’s just playing, well, Redford because his fictional representation of Bryson is a bland and uninteresting lead, while Nolte – who seriously hasn’t aged well, and not just his trademark raspy voice – is saddled with an obnoxious comic relief who’s mainly there for the film to point at and laugh for being fat (look, he’s struggling to get up the hill, and he’s only just begun the trail! Oh, what hijinks! Uuuuuuuugh). Not even the supporting cast are given any decent material to work off of, with most such as Nick Offerman and Mary Steenburgen disappearing after mere minutes of screen-time between them, and Emma Thompson is particularly wasted as Bryson’s wife, who shows up for twenty minutes in total at the beginning and end, with all her dialogue being how she just doesn’t want her husband to go on this journey. We can’t even give credit to the scenery because, although it looks absolutely stunning, the film never gives itself time to just enjoy the wonders of nature, and it all goes by so fast without any kind of fondness that makes it anything more than noticeable.

All of this leads to arguably the film’s biggest crime; it’s simply really, really boring. When you’re forced to sit there and go on a journey with a couple of people you don’t know or don’t care about, getting into unfunny scenarios (or at least, they’re unfunny within the context of the film; we’re sure it killed on paper) and running into irritating people who are there to give the film it’s next big sitcom set-piece, the 102-minute running time suddenly seems a lot longer. The script gives us no opportunity to care about anything that happens, so you’re just waiting impatiently for it to just end instead of being sucked in to the real-life adventures that real people actually went on; and that’s probably the biggest disservice to a true event you can possibly give. Young writers must absolutely recognise that the script, especially when it covers events that actually happened, needs to work before they go ahead and adapt it, otherwise it will just be heavily unbalanced with far more flaws than successes, no matter how good the intentions.

For a study on how to do this type of film right, watch Wild; for how to do it wrong, check out its much lamer cousin A Walk in the Woods. Now that’s a university lecture right there.

A Walk in the Woods is a quintessential example of how a poor script, laden with unfunny humour and underwritten characters, can seriously fail a well-intentioned telling of a true story on the big screen.